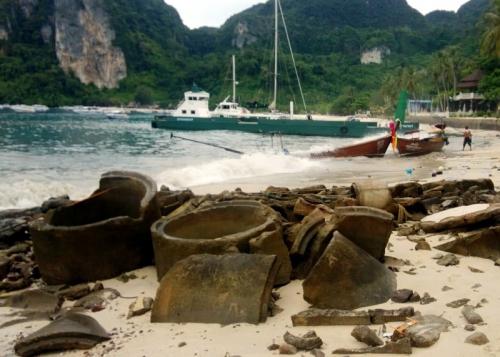 Though fourteen long-tail boats and one speedboat were damaged by the wave, no injuries were reported.

“Fortunately, the wave hit early in the morning so nobody was out in their boat and nobody was injured,” long-tail boat owner, Pornchai Suparb told the Phuket Gazette.

“When I came down to the beach I found my boat and many others damaged, many of them had lost their engines and the speedboat was beached,” he said.

Krabi Disaster Prevention and Mitigation Chief Thalerngsak Phuwayanapong issued a warning shortly after the incident warning all boat users to be careful as heavy winds and more big waves were expected to rock the coast.

Not open yet, but Phuket’s Chalong Marina already needs repairs