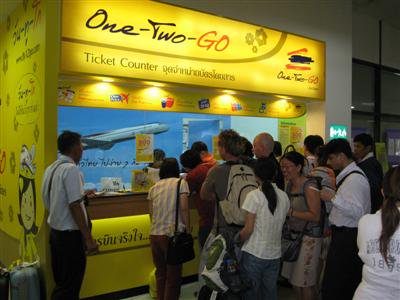 PHUKET (MAI KHAO): Passenger numbers at Phuket International Airport for the last three months of 2008 are expected to be down about 48% year-on-year due to global economic conditions and recent events in the Thai capital.

Phuket International Airport Director Wicha Nernlop told the Gazette that around 65 direct international flights to the airport were canceled during the10-day political standoff that resulted in the closure of Bangkok’s Suvarnabhumi and Don Meuang airports.

Domestic flights during the same period were down 80% as scheduled flights from Bangkok, mostly from Suvarnabhumi, dried up.

Domestic flight schedules have since returned to normal, but six to eight direct international flights a week have been canceled.

Mr Wicha said that only 65 out of a scheduled 665 flights originating from abroad landed during the 10-day period. These included direct international flights as well as scheduled and charter flights continuing on to Phuket from Suvarnabhumi.

The number of passengers arriving on these flights was generally low, he added.

To restore the airport’s image, Mr Wicha hopes to work with both the public and private sector and continue with scheduled expansion plans that will allow the airport to handle record numbers of passengers in the future.

To this end, the airport is planning a big media event to welcome the six millionth person to use the airport this year. The lucky passenger is expected to arrive sometime around Christmas.