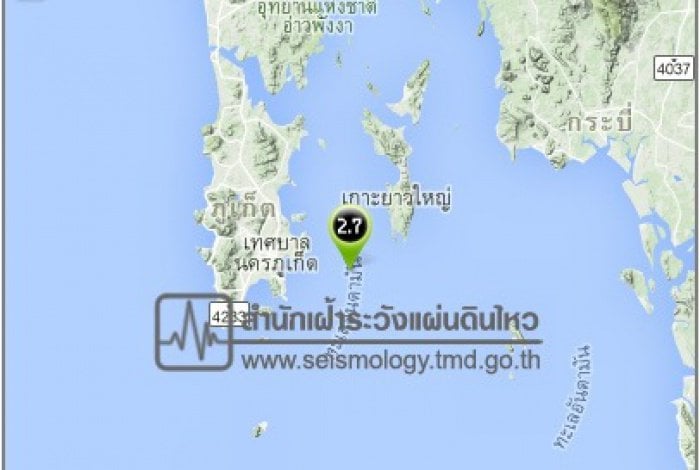 The Thai Meteorological Department reported the quake as striking at 12:14pm, with its epicenter halfway between Phuket and Koh Yao Yai. It struck close to the epicenter of the 4.6 magnitude earthquake that occurred before dawn Wednesday (story here) and subsequent tremblors at 12:25pm the same day (story here) and 12:30am yesterday.

The third quake sent villagers in Koh Sireh running for the hills even though the tsunami alarms were not sounded (video report here).

Though the earthquake and tremblors have shaken residents and tourists alike, officials say there is no need for alarm (story here).

“For an earthquake to cause a tsunami, it would need to be at least 6.5 Richters, depending on where the earthquake strikes,” said Santhawat Riwleung, chief of the Department of Disaster Prevention and Mitigation Phuket office, on Wednesday.

“Earthquakes along this fault should not register more than 5 Richters, so please do not panic.”