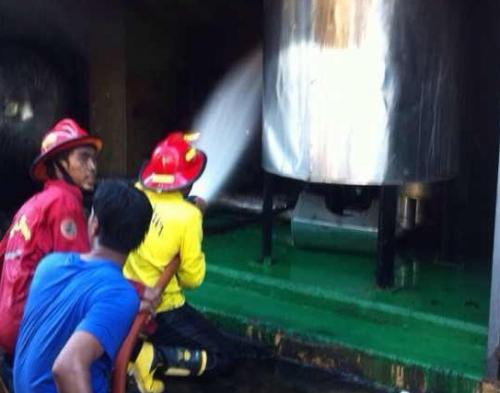 PHUKET: Three staffers and a carpenter were injured in a fire that broke out yesterday afternoon in the laundry facilities at the Phuket Graceland Resort & Spa in Patong.

“When I realized there was a fire, I order hotel staffers to notify guests to evacuate the hotel. We were at about 70 to 80 per cent occupancy, but got all our guests out safely,” Managing Director of Phuket Graceland Resort & Spa Suchart Hirankanokkul told the Phuket Gazette (story here).

All four of the people injured in the fire were taken to Patong Hospital for treatment. Chokchai Aiwsakul, 34, and Jakkrapong Jaysa, 31, were both treated for burns on their arms; Sunas Phanphet, 32, was treated for smoke inhalation, said Patong Police Superintendent Chiraphat Pochanaphan.

Col Jiraphat was unable to provide the name of the carpenter who was treated for serious burns across his body.

“At this stage, we believe that the fire started from oil leaking from the laundry machine. However, we are waiting for Forensic Police to confirm the cause of the fire for our report,” Col Chiraphat said.

“It took 10 fire trucks and their teams to put out the fire,” he said.

“They had the blaze under control in about 20 minutes,” he added.

Mr Suchart, at this point, was unable to estimate the cost of the damage.