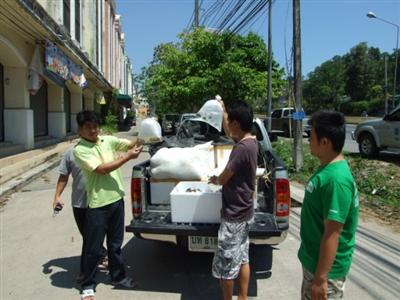 The suspects, 34-year-old Pichit Bangjak and three minors, were arrested at 11am in a pickup truck parked along Thepkrasattri Road in Rassada, near the Phuket Highways Department Office.

A search of foam coolers in the bed of the truck uncovered 250 aquarium fish, 300 corals and 20 sea fans ready for transport in plastic bags and other types of packaging.

The arrests followed a report that men in a truck would be loading protected species onto a Bangkok-bound tour bus leaving the Phuket Bus Terminal in Phuket Town at 10:50am.

The officers followed the P2 company bus out of the station to Rassada, where the men were waiting to flag down the vehicle and load the containers into the storage hold.

The suspects confessed to transporting the items, but insisted the marine life did not belong them.

They were simply hired to transport the fish and coral to Bangkok, they said.

All four suspects were taken to Phuket City Police Station for questioning and charged with possession of protected species without permission.

Police will try to expand the investigation and bring more fish and coral smugglers to justice.

Mr Paitoon said there are still 28 fishing boats operating illegally in the waters off Phuket collecting aquarium fish and transporting them to Bangkok, where there is still high demand for them by aquarium supply stores.

Each of the vessels has a crew of seven or eight men, he said.

Teen charged for fatal stabbing of boyfriend in Phuket