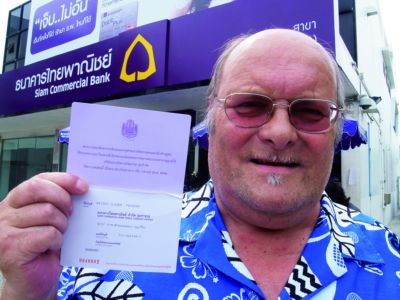 CHALONG, PHUKET: A Frenchman is demanding damages from his Thai bank after it let another man with the same name empty his account of at least 164,000 baht.

The older Claude Prigent has lived in Rawai for three years. He is balding, wears glasses and stands 1.68m tall.

The man who walked out with the card was 1.75m tall, with a full head of hair.

With his namesake’s ATM card in hand, the younger Claude Prigent made a series of withdrawals at ATMs in Phuket and Pattaya in November and December.

On January 16, he spent more than 16,000 baht on duty free goods in Suvarnabhumi Airport, then took a 16,000-baht flight to the Philippines.

In Manila he continued to empty Claude Prigent’s bank account, getting through at least 164,000 baht before his namesake realized anything was wrong.

The ‘real’ Claude Prigent initially put his rapidly dwindling funds down to his own festive overindulgence.

“I noticed at Christmas and New Year that I’d been going through a lot of cash. I thought, ‘best cut down on the spending’. But I didn’t realize someone else was spending the money for me,” he said.

On January 18, his card was rejected by a store in Phuket. When he checked his balance he was shocked to discover only 4,000 baht left.

He went to his branch the next day. The bank was quick to admit it was at fault, yet it refused to pay the money back straight away.

The Manager of the Siam Commercial Bank Branch at Hayek Chalong, Thurdsak Chusak, said the bank had to make sure the two men hadn’t colluded to defraud the bank.

While the bank’s board was deliberating over the case, Claude Prigent was having to rearrange his finances.

“Having my account blocked meant my retirement money could no longer be credited to my account. My French bank wanted a new account number, which they wouldn’t accept by fax. It took six weeks to sort out,” he said.

“Luckily I have another account in France to withdraw from, otherwise how could I have survived?” he added.

Eventually the bank got to the bottom of the affair.

Mr Thurdsak said Claude Alfred Francois Marie Prigent had tried to open an account at one of the bank’s branches on Koh Chang.

“A bank officer there told him there was another account under the same name in Phuket showing on the monitor,” he said.

“He probably tricked the officer into giving out more information about the account, like how much money was in it and where the branch was,” he said.

The man then filed a police report, saying he had lost his Siam Commercial Bank ATM card and bank book, Mr Thurdsak said.

Police report in hand, he walked into the Hayek Chalong Branch.

“The officer didn’t want to annoy the customer or inconvenience him any more, so he didn’t really look at the passport number,” Mr Thurdsak admitted.

Satisfied that Claude Prigent was indeed the victim of a crime, on February 24 Siam Commercial Bank credited his account with 164,000 baht.

Feeling this is not enough, the ‘real’ Claude Prigent wants compensation for the inconvenience the affair has caused him.

“Also, the banking system needs to clean up its act – there are cracks in their system,” he said.

Both Siam Commercial Bank and Claude Prigent agree he should face charges.

“We’ve told the police and immigration to lock him up right away if he ever comes to Thailand again,” Mr Thurdsak said.