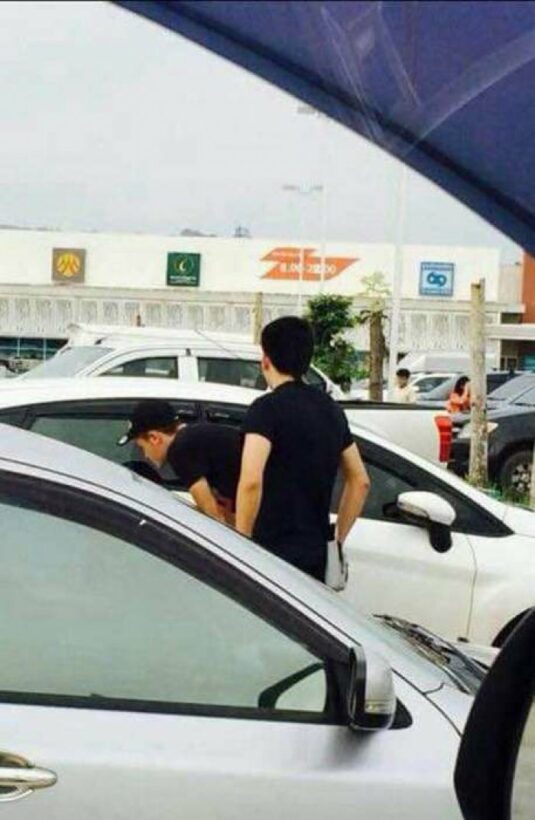 PHUKET: Police are looking for at least three men, thought to be foreigners, who robbed a car in broad daylight at Tesco Lotus Thalang.

“When we arrived, Pasuk Ohara, 43, was standing with her son and his friend near the car. The right side back window had been removed,” said Lt Wichote Meepop of Thalang Police.

“Mrs Pasuk told us that they arrived at Tesco at about 4pm to eat KFC.”

Mrs Pasuk heard an announcement from Tesco staff at about 5:25pm for the owner of a white Ford Fiesta with her plate number to return to the vehicle.

When she returned, she discovered that an iPhone 5 and an iPad mini were stolen from the back seat. Two Darasamuth school bags that belonged to the boys were also missing, confirmed police.

One witness, who asked not to be named, recorded the three men walking around and looking into cars in the parking lot before stopping at Mrs Pasuk’s vehicle.

“I was sitting in my car and saw three men, who looked like foreigners, get out of a dark car. I believe the driver stayed in the vehicle,” the witness said.

“They looked into the back seat of Mrs Pasuk’s car and then went to get something from their trunk. They went back to the car, removed the window, grabbed some stuff and then returned to their car and took off.”

“From reviewing the video, we could see that the men did not smash the window, but cut it out. It looked very professional,” said Lt Wichote. “We will check CCTV cameras on Thepkrasattri Road and the surrounding areas to see where they drove off to. We expect to apprehend them as soon as possible.”