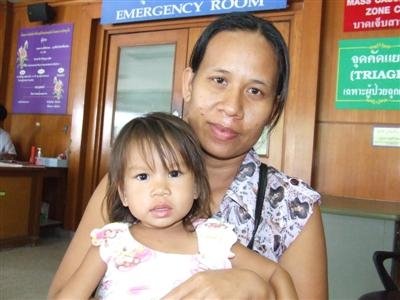 PHUKET: Just a day after 7-year-old drowning victim Methee Khunsuinhu succumbed to injuries and passed away at Vachira Phuket Hospital, quick action by a foreign tourist today spared a toddler of a similar fate at the same beach.

Pawanrat Suetrong, age one year and seven months, was on a family outing to the swimming lagoon near Nai Harn Beach this morning when the near tragedy occurred.

Her mother, 31-year-old Wimon Sangjan, said she took Pawanrat, her four-year-old brother and nine-year old sister to enjoy a day at the beach. Also with the family was Wimon’s own brother, age 14.

She went to get the children some drinking water, leaving them to play in knee-high water at the edge of the lagoon.

“Pawanrat suddenly began sinking into deeper water, then went under. The other children were in the same area, but they did not notice what was happening to her. Fortunately, a foreign woman sprang into action, pulling her back onto the shore unconscious,” she recounted.

“My daughter was put in a Kusoldham Foundation emergency rescue vehicle and rushed to Vachira Phuket Hospital, but after five minutes she began throwing up and then regained consciousness,” she said.

“I’ll never take my children to play in the water again,” she added.

Pawanrat will stay in the hospital overnight for observation.

Mrs Wimol, who works in a Nai Harn restaurant, has lived with her family and other relatives in Chalong for five years.

He husband is currently back visiting their native Suphan Buri province.