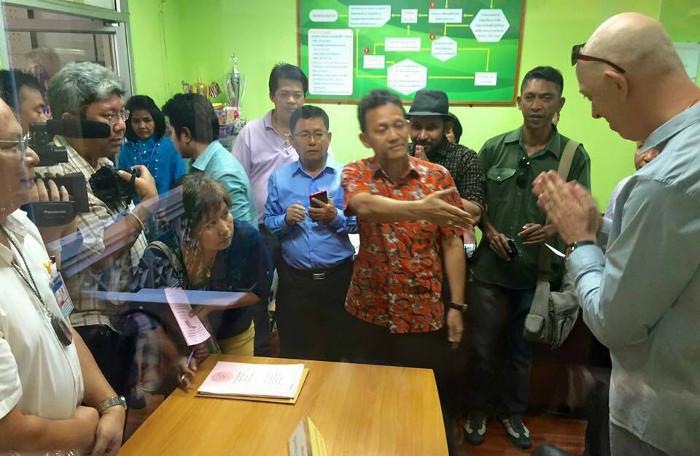 PHUKET: A contingent of tenants leasing rooms at a luxury resort in Kata met with the governor at Phuket Provincial Hall yesterday to hand him a letter demanding an investigation into issues over the property’s management.

Leading the ten foreign tenants from The Aspasia Phuket resort was Dutch national Jan Cornelis van Zuilekom. Mr Zuilekom, who referred to himself as an owner, complained that he and other tenants had been locked out of their rooms and had their electricity and water cut off.

“We have filed a complaint with the Consumer Protection Board [CPB], but the response has been slow,” said Mr Zuilekom.

Phuket Governor Chamroen Tipayapongtada accepted the letter and has agreed to meet with both parties again on Monday.

“We want to listen to both sides, so I have asked for all parties to bring in relevant documentation with them for the meeting,” said Governor Chamroen.

Mr Zuilekom told the governor that he and the other tenants wanted to see how the management company was spending money from their maintenance fees.

“We just want to see the financial report on how the money has been spent, but the management company has refused to show us,” Mr Zuilekom said. “It seems like the expenses are not transparent. We want to change management companies.”

A legal representative for The Aspasia Phuket, who declined to be named, told the Phuket Gazette that only two rooms have had water and electricity shut off as a result of breaches in lease agreements.

“Our client is bound and acting in accordance with the rental agreement. This rental agreement requires that a management fee on a fixed-fee basis is charged to the lessees. For this fee, our client is providing specific defined services. There are no complaints from the lessees when it comes to the quality of the services they receive. However, some of the lessees are insisting on being informed on the details of how our client provides such services and how much they pay in detail for those.”

The legal representative added that the lessees have allegedly requested all payment records, including confidential information, such as staff salary.

“In the meantime, the lessees making the complaints are still benefiting from the services provided [paid by other paying lessees] and are refusing to contribute as required in the lease agreements,” the representative said.