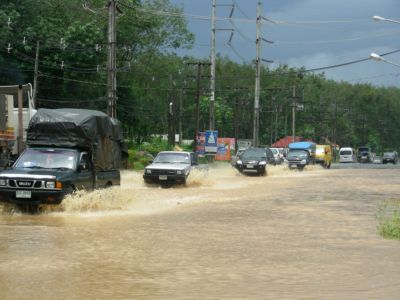 PHUKET: Heavy rains since this morning have caused flooding at many locales around the island, causing long tailbacks along major roads and damage to shops inundated with water.

Patong suffered minor floods this morning before the rain stopped to give the resort town a midday reprieve, but the skies opened again this afternoon and brought more flooding.

Rat-U-Thit 200 Pi Rd saw long tailbacks from Soi Bangla back to Baan Sai Nam Yen School, while on Sirirat Rd at the southern end of Patong one shop staffer told the Gazette that it took an hour to clear out the floodwater from his shop this morning, only to see the shop flood again after just 30 minutes of rain this afternoon.

Patong Municipality workers spent an hour clearing drains at the intersection at the bottom of the hill so that the floodwaters would subside.

The Thai Meteorological Department center in Phuket City recorded rainfall of 34.7 millimeters between 1 pm and 3 pm.

In Chalong, runoff from nearby hills caused flooding across Chao Fa West Rd in front of the Phuket Provincial Electricity substation.

Nearby shophouses were flooded, with staff at TTT Furnishings store saying it was the first time that the shop had been flooded. “Normally, only the road floods, but today it’s not even heavy rain and the shop was flooded after only about an hour,” said one staffer.