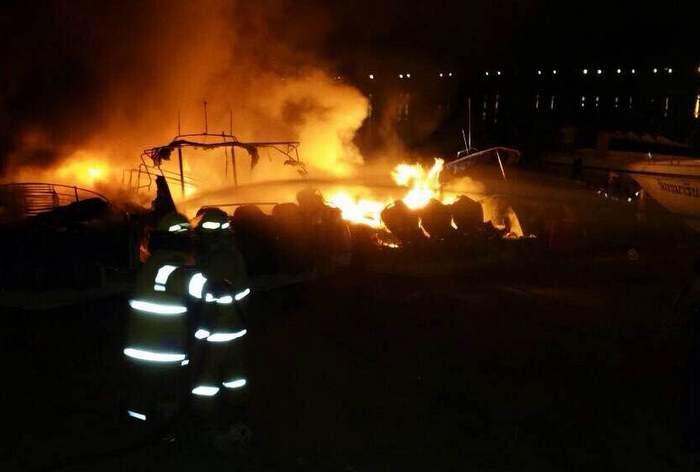 PHUKET: One person was seriously injured as a blaze ravaged a number of speedboats at Chalong Pier this morning.

Firefighters operating from five fire trucks spent about three hours battling the flames due to the massive amount of fuel on board, explained Phuket Marine Police Chief Panya Chaichana.

“The fire wasn’t completely out until about 6am,” Lt Col Panya said.

The boats belong to Nikorn Marine, which had them pulled up on the sand next to Chalong Pier, along with a number of other speedboats from different companies.

The injured person has so far only been named as ‘Mr Don’. He is believed to have been on one of the boats when the fire started.

“Mr Don was rushed to Vachira Phuket Hospital before we arrived. It is lucky that the fire occurred at night, when no tourists were on board,” Col Panya said.

The total damage caused by the fire is estimated at 25 million baht, confirmed Col Panya.

Police launched an investigation into the ferocious blaze, but have yet to determine what triggered it, confirmed Capt Wuthiwat Leangboonjinda of the Chalong Police.

“Hopefully, Mr Don will make a full recovery and be able to provide some insight into what happened,” Capt Wuthiwat said.