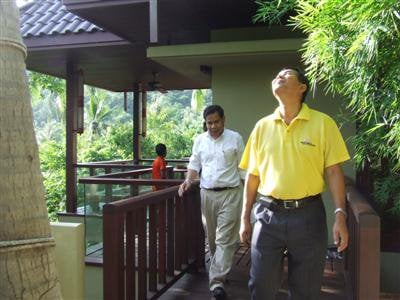 RAWAI, PHUKET: The developers of the Taj Exotica Resort and Spa  planned for Koh Lone will consider abandoning their request to build a pier if the idea is rejected during the environmental impact assessment (EIA) approval process, the Gazette has learned.

Members of a provincial oversight committee on Monday afternoon toured the proposed 136-rai project site, located on the east end of the island in Chalong Bay.

The developers, who have already purchased the land, intend for only 15% of the total 136 rai area to be covered by dwellings, according to the private firm preparing the current EIA application.

Arriving on the island by boat from the nearby Phuket Marine Biological Center Pier at Laem Panwa, the committee members were led on a tour of the project site by Phuwanai ‘Best’ Wanamakok, General Manager of Wanamakok Civil and Engineering Consultants.

Wanamakok Consultants represent project developers Taj Asia Company in Thailand, which has drawn up plans for a 121-unit luxury villa project at an approximate cost of 1.5 billion baht.

Taj Asia is a subsidiary of Taj Hotels Resorts and Palaces, a worldwide chain of luxury hotels and resorts.

The Taj Exotica would be the group’s first resort property in Thailand.

One model villa already completed at the site was shown to the committee and media as part of the tour.

About six of the 21-person committee attended the tour, mostly new members.

The committee, chaired by Governor Wichai Phraisa-ngop, was set up by the governor to scrutinize property developments in environmentally sensitive areas and review environmental impact assessment (EIA) reports.

During unofficial talks with some of the committee members, Mr Phuwanai said the developers might consider improving an existing 1.5 kilometer road from the existing pier to the project site if the revised EIA is not accepted.

This would also benefit local residents, he said.

The project’s first EIA report, submitted in 2005, was based on a 79-room project.

A new EIA needs to be approved before the number of units can be increased.

Thus far the only construction completed at the site is a single ‘model villa’, which was visited by the committee members yesterday.

All villas at the resort, including 19 super-luxury units, would have private swimming pools.

New committee member Praijiad Aksornthammakul, representing the Phuket Provincial Office, said the development plans for the island would be an important topic of conversation at the next committee meeting, to be chaired by Phuket Governor Wichai Phraisa-ngop

Mr Udom Madkul, a local resident who works as a security guard at the project site, said Koh Lone is still home to a wide range of wildlife including barking deer, wild boar, hornbills and pythons.

Right now there are two resorts on Koh Lone: the Ban Mai resort with 10 rooms and the Cruiser Island Resort, with 32 rooms.

Also due for inspection by the committee the same day were: