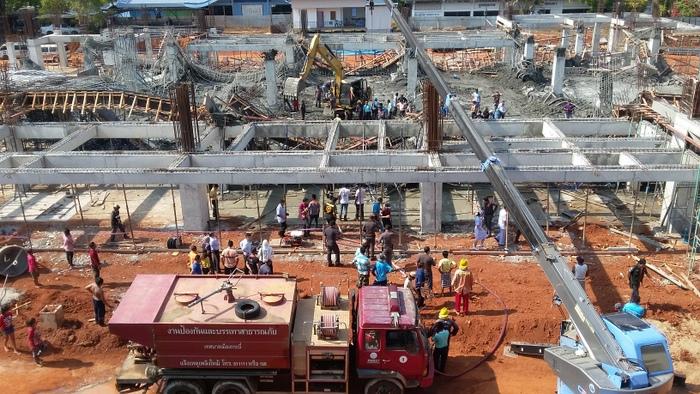 KRABI: Rescue workers attempted to keep the cement wet as they searched for five women lost in the debris of a construction site building collapse yesterday. The bodies of all five women were eventually recovered.

Police are investigating the culpability, if any, of the construction company, Ekphat Enterprise Ltd Part.

“As we have yet to establish the cause of the collapse, we have not charged anyone yet,” said Krabi City Police Superintendent Sompong Thipa-arpakul.

One of the workers at the site, Yoon Noojui, 50, told police that laborers were about to pour the cement for the second floor of the Institute of Physical Education – Krabi Campus building when the accident occurred.

“He said a section of poured cement that had not fully hardened fell on the women working on the first floor,” said Col Sompong. “However, he had no idea why it happened.”

The project was started in July last year and slated to finish in July, 2017.

Ekphat Enterprise is negotiating compensation with the families of the women killed in the incident, confirmed Col Sompong.