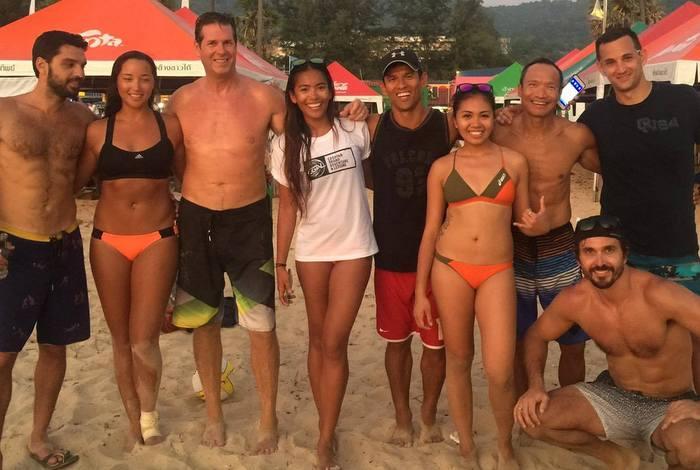 PHUKET: The finals for the Thailand Beach Volley Festival Phuket will take to the sands of Karon Beach tomorrow at about noon.

“We are really happy and little surprised with the standard of play; it’s a bit higher than expected,” Charlie Solares-Chungyampin, the director of Beach Volleyball Thailand, told the Phuket Gazette today. “We have a lot of international and local players, as well as some national players at the event.”

Mr Solares-Chungyampin, who grew up in with the beach volleyball scene in California, is working to develop the game in Thailand.

“Thailand, in general, has such good weather. And that’s the thing about beach volleyball, you need good weather: not too much wind, no rain,” Mr Solares-Chungyampin said. “Beach Volleyball Thailand’s goal is to grow the game in Thailand. So today, we brought a bunch of the provincial school children out to get them playing with the pros. Thailand has lots of great athletes, and though they are good inside on the court, most are pretty new to beach volleyball.”

Entrance to the finals is free, and there will be seating available for spectators, confirmed Mr Solares-Chungyampin.