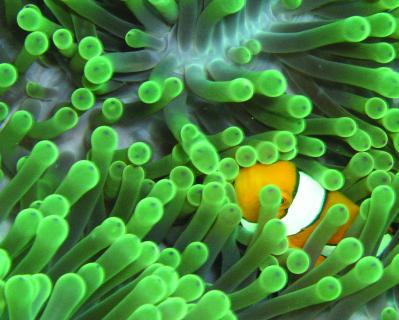 THA CHAT CHAI: Local police and fishery officials seized more than 1,000 protected tropical fish as they were about to be transported off the island by truck on Friday morning.

Acting on a tip off, Tha Chat Chai Police and officials from the Phuket Provincial Fishery Office (PPFO) stopped a blue pick-up at the Tha Chat Chai checkpoint. The vehicle was found loaded with 292 bags of tropical fish stored in 39 boxes.

Among the fish seized were a number of clown fish, the species of reef fish popularized in the movie Finding Nemo. It is illegal to catch this species, and many others, in the waters around Phuket, the Phi Phi Islands and Pattaya.

Police seized the fish and arrested the pick-up driver, 47-year-old Pajon Jinda of Phang Nga. If convicted of breaking laws prohibiting the trade of protected species, he faces a 100,000 baht fine, a year in jail, or both.

After interrogating Pajon, police learned that the protected fish had come from a house in Moo 6, Rawai. A subsequent search of the premises turned up more protected fish in tanks, aquarium equipment and bag-sealing machines.

The owner, Phongsri Athirattamongkhon, 44, confessed to being in illegal possession of protected species.

Remarkably, Phongsri was arrested for the same crime, at the same house, in December 1999. At that time she told police she bought the fish from Sea Gypsies in Rawai and sold them to agents in Bangkok and overseas for 10 to 20 baht each.

PPFO Chief Sinthi Daengsakul said that the seized fish had been on their way to Surat Thani airport, from where they were to be flown to the capital on the 10:30 am flight today.

K. Sinthi estimated the value of the fish, which are popular with aquarium owners, at about 150,000 baht. He said the PPFO has a plan to teach people how to raise beautiful tropical fish on farms as an alternative to removing them from their natural habitat.

The fish, which are now being held as evidence in the case, will eventually be released back into the sea.