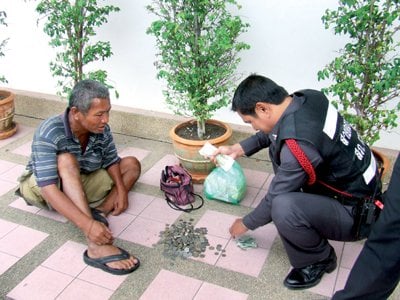 PHUKET: Government departments are coordinating a crack down on street beggars in Phuket this Valentine’s Day.

Tomorrow at 1:30pm, Governor Tri Augkaradacha will implement policies to remove beggars in all three Phuket districts. This will be done in accordance with the Control of Beggars Act BE 2484 (1941), which requires that provincial officers arrest vagrants.

“To solve the problem of the many vagrants in Phuket, Governor Tri Augkaradacha has tasked the Phuket Provincial Office of Social Development and Human Security (SDHS-Phuket) to cooperate with police, immigration officers, health officers and other local organizations,” said SDHS-Phuket Chief Chaunchom Chanthawong at a press conference on January 31 at Provincial Hall.

“Vagrants can always be seen at tourist locations and market fairs begging for money. Some are voluntarily here in Phuket to earn money, while others are being forced to beg,” she said.

“Phuket is a tourist destination, if we have too many beggars on our streets it says that we don’t have a high quality of life or adequate safety here,” she added.

The beggars tend to be children, women and disabled or elderly people. They are often poor Thais or illegal alien workers from Burma, Laos or Cambodia she explained.

“The problem will continue if people keep giving money to beggars, even just a little amount.

“We need the cooperation of policemen on the streets to deal with this aspect of human trafficking and to be strict on beggars,” she said.

Though many beggars arrested by SDHS-Phuket make more than 500 baht a day, Chief Chaunchom explained that most of those from abroad are brought here by a “broker”, who receives the majority of the money made.

Chief Chaunchom noted that the organizers frequently used beggars that generated pity, such as children with missing limbs or those that are mentally ill.

Once arrested there are several things that can happen to the beggars depending on their nationality, age and their mental and physical condition, said Chief Chaunchom.

Thai nationals between 18 and 60 years old will be sent to the Southern Home for the Destitute (Sichon Home) in Nakhon Srithammarat for rehabilitation and career training, while those less than 18 years old can expect parole with a warning given to their parents. However if their parents cannot be found they will be sent to Phuket’s Shelter for Children and Families.

Those over 60 years old will be sent to the Social Welfare Department’s center for old people.

The Phuket Immigration office deals with foreign nationals, who are usually deported, she said.

Health officers are usually only involved in a case if there are signs that the vagrant is suffering from mental illness or serious contagious diseases, such as leprosy, she added.

“A beggar arrested for a first offense will spend three months undergoing social development and welfare care. They will receive a year for a second offense and two years if they are caught a third time,” explained Chief Chaunchom.

“If they behave well and have relatives that are able to take care of them they may be able to leave early,” she added.

“Many Thai beggars go back to begging after they are released from care. If they are arrested again, inquiries against their social security number will tell us their criminal history. They won’t be released again until they have been rehabilitated,” she said.

“If in pity, we give them money, then the business operators who force others, such as old people and children to do the begging will just continue,” said Vice Governor Sommai Preechasin who also attended the meeting.

“Instead we can donate in other ways, such as giving money and necessary things to care organizations and sheltered homes,” she added.

“Should anyone wish to donate money to disadvantaged people they can contact us [SDHS-Phuket]. We are always happy to forward donations to the relevant organizations,” Chief Chaunchom concluded.