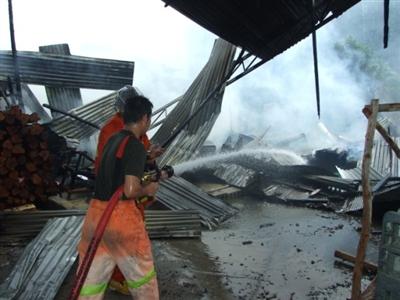 PHUKET: A lumberyard in Thalang sustained hundreds of thousands of baht in damages yesterday after firefighters from Thepkrasattri Municipality rushed to fight the blaze with an empty water tank.

Local residents reported a fire at Ta Wood Trading on Thepkrasattri northbound at about 2pm yesterday.

The fire was still small when the firefighters arrived, but after realizing their fire truck’s water tank was empty they were helpless to stop the flames from engulfing the godown.

Ten firetrucks from other parts of Phuket took three hours to eventually put out the flames.

The building was locked and there were no water sources nearby, so they called for help from the Disaster Prevention and Mitigation office at Thepkrasattri Municipality.

When they arrived, firefighters realized with great dismay that the truck had not been filled with water.

They called for help from other local government offices, but could only watch as flames quickly spread over piles of wood and other flammable construction materials.

Shop owner Tueanjai Saratho said it was too early estimate the damage, but that it would run into hundreds of thousands of baht.

The cause of the fire is so far unknown as no-one is thought to have been in the warehouse when it started.

Police suspect a short circuit or arson, but are awaiting the results of an examination by a forensics team.