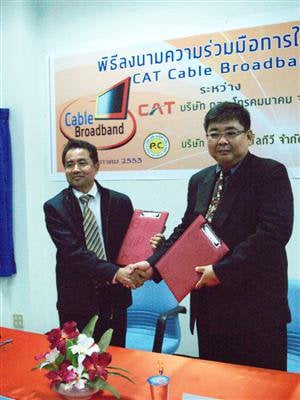 On Friday, Rawai Cable became the latest company to sign the agreement, which allows CAT to provide 4MB Internet through existing cable connections.

The AAG is a 20,000km cable network connecting Asia Pacific nations with the United States. CAT is one of 19 telecommunications firms that combined to provide US$500mn in total funding for the AAG project.

Phuket Cable signed the MOU with CAT on Thursday.

CAT is already supplying the same service in Yala, Songkhla and Pattani provinces, said Mr Theerapong, who signed the MOU on his company’s behalf.

A CAT Internet Gateway, the second in Thailand after Bangkok, is currently being installed in Songkhla.

The new Gateway means Southern Thai Internet traffic, including Phuket, will bypass the capital, increasing stability and speed, he said.