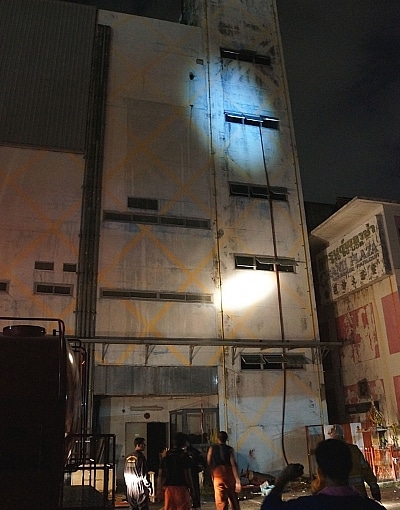 PHUKET: An electrical fire caused a panicked evacuation from a cinema complex in the heart of Phuket Town last night, but no injuries were reported.

Staff at the Coliseum Paradise Mutliplex cinemas at Ocean Shopping Mall noticed smoke billowing from two electrical transformers on a fourth-floor control room at about 7pm.

They tried to cool the transformers with fire extinguishers, then ordered an evacuation and notified Phuket City Municipality firefighters when the effort failed.

The evacuation occurred just as guests were lined up to buy tickets for the early evening shows. The amount of smoke caused a great deal of panic in the general vicinity.

Police cordoned off the area and four Phuket City Municipality firetrucks parked near the entrance to the now defunct Grand Plaza Massage Parlour, the best point of access to the control room high above.

Because of the difficulty of access, it took firefighters about an hour to get the situation under control.

After the electrical fire was under control, firefighters drilled a hole in an exterior wall to drain water from the building and help release a deep build-up of smoke from inside.

Mana Ardpaksa, the long-time manager of the Coliseum Paradise Phuket complex, told the Gazette the fire started in the fourth-floor control room that operates theaters 5 and 6, located one floor below.

“One of the cinema staff saw smoke pouring out from the electrical control room and attempted to put out the fire with a fire extinguisher. When he found the fire was out of control, he contacted me and I ordered the electricity to be cut,” he said.

“At that moment, there were no guests in the movie theaters. All of them were waiting outside. Some were at the ticket office. So we made an announcement to inform everyone about the fire and safely evacuated everyone,” he said.

Phuket City Police Superintendent Chote Chidchai said he suspected the fire was caused by a short in the electrical supply system.

“However, I will send police officers to investigate again later,” he said.

“The police officers need to investigate the cause of the fire and we will need some time to renovate. It’s too early to assess the damage or how long it will take to repair. We will not allow anyone inside until it is safe,” said Mr Mana.

Fire safety issues at the complex have been a subject in the Gazette’s Issues & Answers forum in the past.

Racism gets the boot