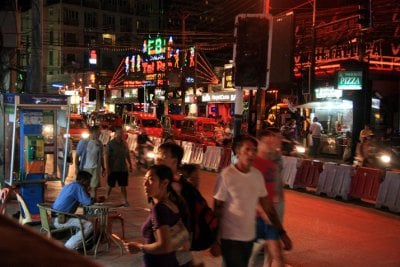 The victim, 19-year-old “Bonnie May”, asked that the Phuket Gazette use only her nickname out of fear or reprisal by the gang of ladyboys, who she said attacked her for no reason after she asked them for directions.

Speaking to the Gazette at Bangkok Hospital Phuket while awaiting a medical checkup yesterday afternoon, five-months-pregnant Bonnie recounted her ordeal.

“At about 1am I was walking alone back to my hotel from Soi Bangla and tried to make a shortcut through a small alley.

“Then they started to attack me, punching my arm, hitting my face, pulling my hair and kicking my back. I cried out that I was pregnant, but they did not listen. They kept attacking me. They were also touching my vagina and kicking my belly. They took my bag, which had an iPhone and camera inside, and pulled my gold ring off my finger,” she said.

The only reason she was not robbed of cash was that she had none on her at the time, she said.

“Three of them attacked me while the fourth acted as a sort of sentry, telling people to keep away. There were a few people around, but nobody came to help me,” added Bonnie.

“I was crying and screaming, so they tried to cover my mouth to keep me quiet. Every time I made a noise they would slap my face, so I stopped moving, pretending I had given up. Then they kicked me a few times before running away,” she said.

After the attack she rushed to the hotel where she was staying with her 24-year-old boyfriend. Bonnie said she could not remember the name of the street where the attack took place, but a source familiar with the case told the Gazette that it was “near Tai Pan, a popular nightclub on Rat-U-Thit 200 Pi Road near the Bangla Road intersection.

Asked why she was walking alone at the time, she said she went to meet someone on Soi Bangla while her boyfriend stayed at the hotel with a friend.

“Our hotel is not far from Soi Bangla,” she said.

The couple arrived at Patong Hospital at about 3:30pm, after which time an ambulance transported Bonnie to the better-equipped Bangkok Hospital Phuket, a private hospital in Phuket Town.

Bonnie’s greatest fear was that kicks to her stomach could have injured her unborn baby.

“They kicked my belly, and my belly did not move all day after that,” she said.

Once the medical checkup was complete, Bonnie said her next stop would be Patong Police Station to file a complaint against her assailants.

“I can identify all four of them, especially the tall, skinny leader, who had long hair and a protruding jaw,” she said.

“They are so scary and nasty. I did not do anything wrong,” she said.

Her boyfriend, who declined to give his name, said the couple arrived in Phuket on February 17 after a week in Bangkok and were scheduled to leave on March 3.

“We stayed in Bangkok for seven days before coming down to Phuket,” Bonnie said.

“We would like to talk with the embassy first. I’m so scared. This is the first time I have ever experienced anything like this,” she said.

Bonnie said she didn’t think she would ever return to Phuket.

After a 40-minute evaluation by a hospital physician, Bonnie emerged from the examination with her boyfriend.

“The fetus is fine and we are going to have a baby girl,” she told the Gazette with a smile on her face.