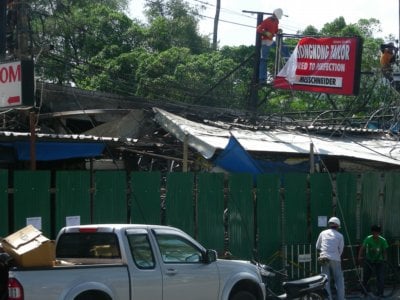 PATONG: A fire broke out on Thaweewong Rd about 4 am yesterday, destroying eight vendors’ stalls and causing an estimated 10 million baht in damages.

The fire broke out in a row of shops near the Holiday Inn Resort. After being notified of the blaze by Kathu Police, 10 trucks from Patong Municipality Fire Department rushed to the scene, where stalls were engulfed by flames several meters high.

Despite the late hour, many local residents and tourists looked on as firemen struggled to put out the fire, which was fueled by garments stored by vendors.

Kathu Police Investigator Pol Capt Pratuang Pholmana, responsible for the investigation into the cause of the blaze, told the Gazette that the combined value of the damage was about 10 million baht, with about 20 vendors suffering losses.

Firefighters were hampered in their efforts to put out the fire by live electrical wires hanging from power poles between the shops and the road, he added.

The presence of so many dangling cables along the beach road has long been a source of complaint from tourists and local shop owners alike.

Patong Municipality had requested that the cables be installed underground as part of the Tourism Authority of Thailand’s post-tsunami redevelopment plan for the area, but the request was denied.

Kathu roadworks to cause tailbacks