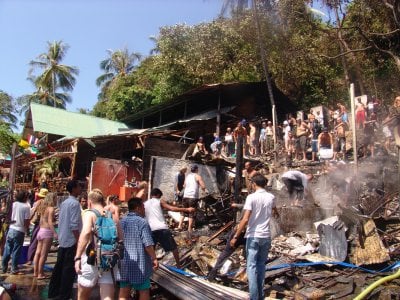 PHI PHI DON (Nation, Kom Chad Luek, Gazette): A fire raged through beachfront shops at the eastern end of Ton Sai Bay on Koh Phi Phi Don on Sunday, causing estimated damages of more than 2 million baht. No one was hurt in the blaze.

The fire began at a beer bar around 11:30 am and swiftly raged through 10 other shops. With freshwater supplies on the island quickly depleted, hundreds of residents and tourists formed a line and passed buckets of seawater up the rocky beach to douse the flames. It took about two hours to finally put out the fire, which was strengthened by gusty winds.

Krabi Governor Siva Sirisaovalak later praised the tourists and everyone involved for their part in extinguishing the fire.

“Had they not joined hands, the damage could have been much more widespread,” said Gov Siva, who noted that the blaze had been prevented from spreading to nearby hotels and bungalows.

Phi Phi police chief Lt Col Jakra Saovakul said witnesses suggested a short circuit was the cause of the fire. He estimated the damage at 2 million baht, mostly in destroyed alcohol products, fishing gear and dry goods sold in the 10 shops.

Funds had already been allocated to the island’s disaster prevention and mitigation center, he added.

The province also brought in tents and consumer goods for the victims, one of whom described the damage to her gutted shop as “just as devastating as the tsunami”.

R/Adml Supot Pruksa, Commanding Officer of the Third Naval Area Command, ordered a Navy helicopter to fly in from its base at Phuket International Airport to conduct an aerial survey of the damage.

After two years of recovering from the 2004 tsunami, the Phi Phi Islands have been attracting large numbers of tourists in recent months.