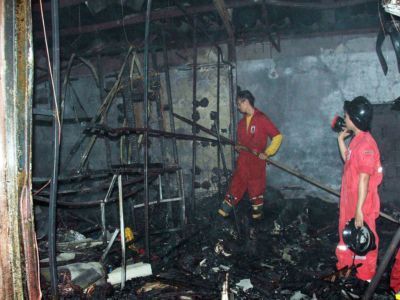 PATONG: Firefighters took more than an hour to extinguish a fire that broke out in Jintana Plaza, opposite the Immigration office on the Patong beach road, early Wednesday morning.

Lt Naruewat Putthaviro of Kathu Police Station told the Gazette that the fire started before 4 am.

“When I arrived there, the fire had already destroyed a large area. We used four fire engines and took more than an hour to bring the fire under control,” he said.

“No people were injured in the fire as the buildings were empty at the time. However, it destroyed many of the goods stored in the shops, such as clothes, bags, watches, sunglasses and shoes,” he added.

Police have yet to determine the cause of the fire, said Lt Naruewat, adding, “We are waiting for the results of the fire investigation team.”

“Only a few shop owners have come forward and reported the estimated cost of the stock they have lost in the fire. It is still too early to give an estimate of the total damage caused,” he said.

One report in the Thai press estimated the damage at 10 million baht.