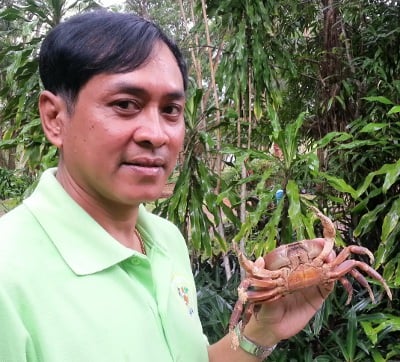 PHUKET: A rare type of crab, thought to be extinct on Phuket, was recently found on the island, years after any previous confirmed sightings were reported.

An officer at the Phuket Marine National Park Research Center caught a “hairy leg mountain crab” in a mangrove forest at Tah Chat Chai, at the northern tip of Phuket, last Wednesday.

“This kind of crab is more commonly found on the Similan islands, Ta Chai Island in Phang Nga and Kradan Island in Trang, but not on main islands like Phuket,” Prarop Plaeng-Ngarn, chief of the Phuket Marine National Park Research Center, told the Phuket Gazette.

The specimen caught weighs about 200 grams and has a shell measuring 8.5 centimeters long and 7cm wide, Mr Prarop said.

“It’s such a relief to find such a good specimen on the island. This kind of crab is rare – almost extinct. One of our officers found it. We think it was looking for food,” he said.

“It shows that mangrove forests in Tah Chat Chai are still full of life. We believe there are many more of them [the crabs] living and breeding in the mangroves,” Mr Prarop added.

The crab is also known by locals as Pu Kai, or “chicken crab”, for the “cheep cheep” sound it makes. Other local names for the species include Pu Phukhao (mountain crab) and Pu Kon (hairy crab).

“Hairy leg mountain crabs forage for food at night. Their shells are rounded, and not serrated like other kind of crabs,” Mr Prarop explained.

“Before catching this crab, we received a report from Burmese workers in the area that they had heard this ‘cheep cheep’ sound in the mangroves,” he added.

Mr Prarop is organizing a team to scour the mangroves to confirm whether or not Phuket is home to more Hairy leg mountain crabs.

“We want to see how many there are. If we find more of these crabs living in the mangroves here, we will install cameras to study their behavior and take photos for research,” he said.

Mr Prarop invited all persons interested to join the walk-through discovery expedition of the mangroves, to be held on Thursday night, starting at 8:30pm.

“Anyone interested in joining the discovery mission, including foreigners, can call the research center at 076-348526 [during government officer hours],” he added.