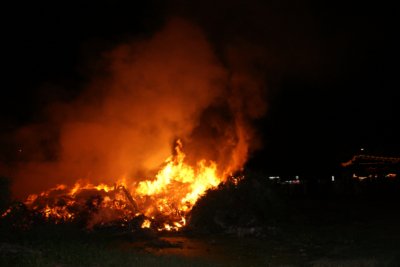 PHUKET: Wasteland opposite Kata Night Bazaar was ablaze last night following attempts to smoke out a suspected thief on the run.

At 7.30pm, eyewitnesses reported seeing a Burmese man snatch a mobile phone from another Burmese male outside a tailor’s shop on the busy Thai Na Road in Kata. The man then ran off in the direction of Kata Beach. The suspect was pursued by police south along Kata Road but escaped along a pathway that connects Kata Road to Pak Bang Road and runs parallel to the beach, witnesses said.

The police blocked off both ends of the narrow path that cuts through the Club Med complex but the suspect was able to escape. Around 20 minutes later, fire was raging across wasteland adjacent to the complex, near the area that police had been searching for the suspect.

No injuries were reported and no buildings were damaged by the fire, which was quickly put out by the fire brigade, and caused bars along the popular strip on Kata Road to become engulfed in smoke.

Kata police told the Gazette that civilians joined in the hunt for the suspect and that the fire broke out when the vigilantes attempted to smoke out the suspect. It has not been confirmed whether the suspect was eventually apprehended.

Phuket may benefit, but free visas backfire on honorary consulates