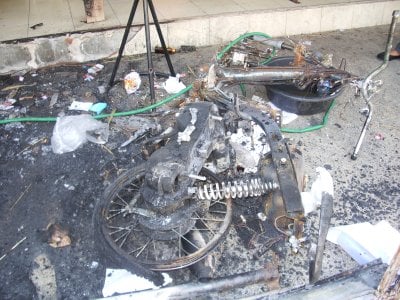 KATHU, PHUKET: Police are investigating a fire in Phuket early Sunday morning that destroyed a roadside tour counter and a motorbike.

Kathu Police Duty Officer Jongserm Preecha today confirmed reports of an arson attack at about 4:30am at the Krisda Travel Service counter on Soi Chaiwat, off Phra Barami Road at the north end of Patong.

By the time Patong Municipality firefighters arrived, the blaze had already destroyed the tour counter and a Yamaha Fino motorbike.

Electric lines running above the counter were burned and another motorbike was damaged, but the internet café and dry goods shop nearby were protected by roll-down metal doors and remained undamaged.

Wanphen ‘May’ Leuengerger, the 44-year-old owner of a bar on Soi Bangla, told the Gazette this morning she thought the attack was related to teenage gang violence.

Her son runs the internet cafe, which has many teenage customers, she said.

The attack appeared to target the Fino motorbike.

“I think it may have been a misunderstanding. My son told me one of his customers had a similar motorbike. Perhaps those responsible hit the wrong target,” she said.

Her son returned home to Nakhon Sri Thammarat because he was so upset about the incident, she said.

Ms Wanphen ruled out the possibility that the arson attack could have been linked to her own business on Soi Bangla.

Capt Jongserm declined to confirm or deny media reports that quote witnesses saying the blaze was started by two hooded men on a white Honda Click who cast a Molotov cocktail at the ill-fated Fino before speeding away.

The incident is still under investigation, he said.