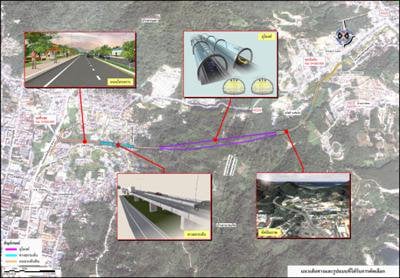 PHUKET: Patong residents are divided over the controversial plan to bore a road tunnel under Patong Hill, a recent public hearing revealed.

Local residents voiced their opinions on April 27 when a public hearing on the issue was held at the Phuket Graceland Resort.

Around 700 residents, municipal officers from Patong and Kathu, the project development team and other stakeholders attended the hearing.

Phuket Governor Wichai Phraisa-ngop, who chaired the hearing, said the tunnel was needed for both infrastructure and safety reasons.

The tunnel is a ‘necessary facility to welcome tourists’ that will facilitate traffic flow between Kathu and Patong and prevent up to 500 road accidents each year, he said.

At the meeting, local residents listened to development plans presented by a project study team made up of members from Epsilon Co Ltd, PlanPro Corp Ltd, and the Energy and Environmental Engineering Center (EEEC).

The team presented a progress report on their feasibility study of six possible routes under consideration. Criteria included funding and engineering factors, as well as projected effects on the local economy, traffic flow and environment. Social factors and the level of public participation were also considered.

Taking all these into account, the team announced its recommendation: two 1.17-kilometer tunnels with elevated roads at both ends.

Approaching Patong Hill from Kathu, traffic would divert near the Go Kart Speedway on Phra Barami Road (Route 4029) onto an elevated road leading up to the tunnel.

Traffic would emerge on the Patong side onto a 204-meter-long elevated road that would pass over Phisit Gorani Road in Baan Mon and connect to Phang Muang Sai Kor Rd near the APK apartment complex.

Around 300 of those in attendance, mostly business operators, rallied around a cloth banner that read: ‘We support the tunnel project’.

However, opposed to the proposal were a similar number of Baan Mon residents sporting T-shirts with ‘Baan Mon doesn’t want the tunnel’ printed on the back.

The tunnel would adversely affect the community, with some families having to give up their land for construction of the elevated roadway that would pass over parts of their village, they said.

Another point was that the proposed path of the elevated road was over the Ratchapathanusorn (the National Memorial of His Majesty The King’s Footprint) on Phisit Gorani Road.

The site commemorates HM The King’s visit to Patong on March 11, 1959.

Villagers were also concerned about the toll fees to cover the construction cost of the tunnel, which is estimated to exceed one billion baht.

Assistant project manager Siriprapha Ratiwat said that disagreements will be noted in the report. The next step is be to examine possible effects on the local community and hold meetings with villagers, she said.

“In November we will conclude our study and submit our report to Patong Municipality. Then it’s up to the people of Patong to decide whether or not they want this project,” she said.

For an in-depth report, pick up a copy of the Phuket Gazette on newsstands this Saturday.