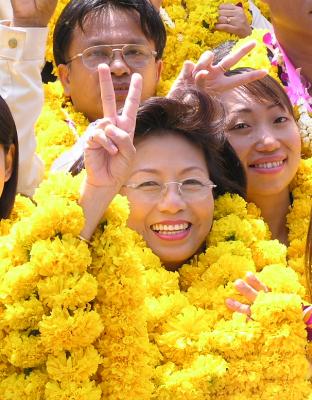 PHUKET CITY: Nearly three months after the Phuket City Municipality elections, Somjai Suwannasuppana of the Khon Noom (Young Turks) Party today received official confirmation that she is Phuket City’s first directly-elected mayor. In the April 4 election, K. Somjai polled 11,986 votes, defeating Prawat Suwannadithakul, of the Chao Baan Sarng San (Creative) Party, by a scant 1,406 votes. Phuket City voters also elected six councilors to each of four constituencies, with Khon Noom taking 14 of the 24 seats. The other 10 positions went to Chao Baan Sarng San. Dr Prapa Kayee, Chairperson of the Phuket Election Commission (PEC), told the Gazette today, “The Central Election Commission [in Bangkok] approved the election results last Saturday but we received the official notice just yesterday.” Mayor Somjai and her councilors were not immediately available for comment; they were riding around Phuket City on the back of a six-wheel truck, thanking people on the street for voting them into power.