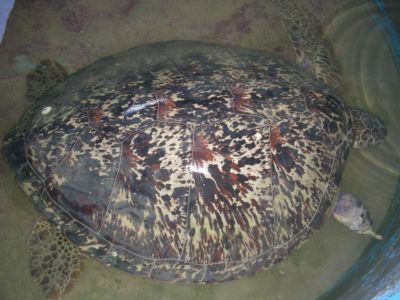 CAPE PANWA: A green sea turtle rescued from a fishing net in Satun last week had a badly inflected flipper amputated at the Phuket Marine Biological Center (PMBC) this afternoon.

PMBC veterinarians led by Sontaya Manawattana said that the “flipperectomy” was the only way to save the animal, an otherwise healthy 20-year-old female.

The turtle was found off Koh Rayatot Yai, in Satun, where she had been pierced with five fishhooks and tightly ensnared by netting that had cut off circulation to her right front flipper, allowing infection to set in.

She arrived at the PMBC at 9 pm last night.

At 75 kilos, she is the largest of 15 rescued sea turtles sent to the PMBC for treatment this year. The center treated a total of 30 sea turtles of various species throughout 2007.

K. Sontaya said the turtle will need up to six months of close, post-surgery care. After the wound has healed, they will test the reptile’s swimming ability.

Some three-legged sea turtles have been known to survive in the wild, he said.

The PMBC have yet to name the turtle, as it does with many endangered species sent there for long-term treatment.

“The green turtle population is very worrying because it falls lower and lower each year,” K. Sontaya said.

The decline in the number of green turtles and other sea turtle species in local waters is due in large part to the destruction of nesting sites by tourism and real-estate projects, he added.

Green sea turtles are listed as endangered in the wild by the International Union for the Conservation of Nature and Natural Resources (IUCN), the world’s main authority on the conservation status of species.