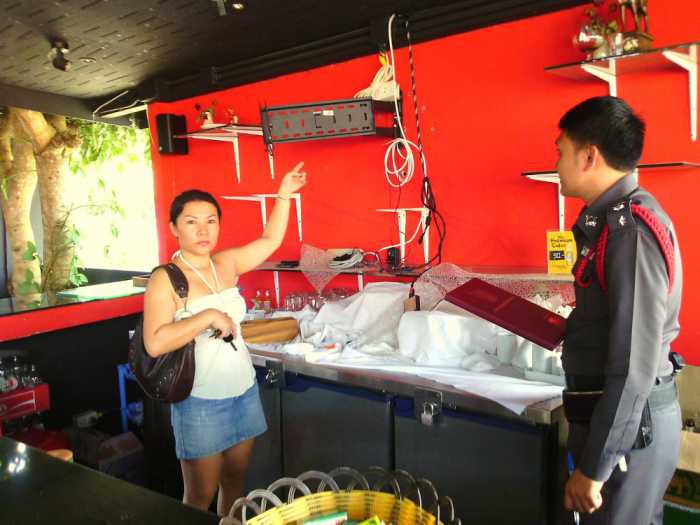 Capt Wattana Bumrungthin of the Thung Thong Police received a call at about 3pm to investigate a robbery at the Fiesta Cafe in Kathu.

“We closed the restaurant after all of the staff left to join the Vegetarian Festival in Phuket Town,” said cafe owner Pattariphat Sudrong, 39.

“When we came back, we saw our restaurant had been robbed.”

The thieves made off with a 42-inch Samsung LED television, a home-theater system and satellite-television decoder.

Nothing else was stolen in the break-in, confirmed Ms Pattariphat.

“We don’t keep any cash on the premises,” she added.

Meanwhile, thieves broke in to the Prong-Dong restaurant, also in Thung Thong, while the owners were away to join a “Duen Sip” (literally “Tenth Month”) ceremony in Nakhon Sri Thammarat.

“We came back to find that the restaurant had been broken-in and our 42-inch television and satellite TV decoder was gone,” explained restaurateur Ukorn Hemtanon.

As with the Fiesta Cafe, nothing else was stolen from the Prong-Dong restaurant, confirmed Mr Ukorn.

“It looked like they searched for other items to take, but we leave no valuables on the premises overnight,” he said.

Both restaurants do not have CCTV security cameras fitted, but police were able to lift a fingerprint at the scene at Prong-Dong restaurant as evidence in the ongoing investigation, Capt Wattana confirmed.