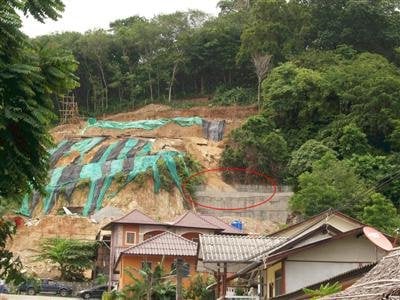 PHUKET: Phuket Governor Wichai Phraisa-ngop has expressed sorrow and frustration over the mudslide that killed two workmen in Patong on Sunday.

The monsoon season rains have begun and the state of the island’s hillsides mean Phuket will likely encounter more landslides, Gov Wichai said.

Gov Wichai said that since the beginning of his term in Phuket he has spoken out about the problem of dangerous hillside development, but could do little since ultimate responsibility rests with organizations that are not under his control.

With no way of punishing or rewarding these bodies, hillside areas continue to be denuded, he said.

When trees are cleared there is nothing to hold earth to the hillsides and heavy rain causes the waterlogged soil to slip, bringing problems to those who live beneath. At the same time there are no consequences for responsible officials or project owners, Gov Wichai explained.

As well as keeping a close eye on what was going on, it was necessary to examine the Environmental Impact Assessment (EIA) process, he said.

Gov Wichai said he put a stop to many projects, but subsequently faced criticism that he was “not supporting development”.

He appointed some experts to a provincial environmental oversight committee, but they weren’t able to counter the voices of ‘certain elements’ who had rather larger roles in what has happening, he said.

Gov Wichai said he wasn’t sure whether the people behind such developments were involved with companies carrying out EIAs or whether local government organizations were responsible, since they have to give final permission for construction to begin.

Nevertheless, provisions of current environmental laws could still be used to deal with the committee, he said.

If everyone works together seriously, problems could be solved, Gov Wichai said.