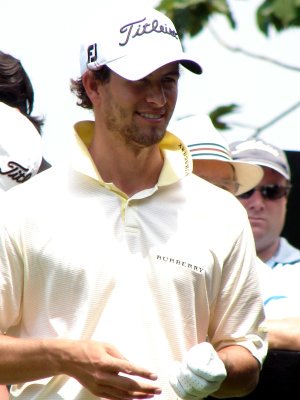 THALANG: The first day of play at the 2007 Johnnie Walker Classic produced some surprised leaders as the favorites coming into the event struggled with challenging fairways at the Blue Canyon Country Club.

The morning produced a string of early birdies as Australian Brad Kennedy carded eight on his way to the lead with 65, which was closely matched by Englishman Graeme Storm and former Masters champion Mike Weir, who both recorded 66.

Storm holed his second shot on the 10th for a rare eagle followed by another impressive eagle on the 11th by Weir.

The tri-sanctioned event also produced some interesting groups, as the top Asian players competed against the world’s best. The tournament is also remarkable for the strong showing of young players coming up in the ranks.

The big names, and expected leaders, had a mixed day. South African Ernie Els struggled to 39 (+3) before recovering with five birdies on the way to a mediocre 73.

Fellow South African Retief Goosen looked his usual cool self and shot a solid 68, while Australian Adam Scott had problems off the tee early on, before he found his groove on the 9th with a great eagle.

Jeev Milkha Singh, from India, continues to impress with his unorthodox swing and amazing powers of recovery. His wild hook off the 3rd tee resulted in a great par, which he then followed with an eagle at 9 and birdies at holes 11, 12 and 15 to card an overall 67.

Englishman Paul Casey left a few shots on the course and returned a modest 71. Casey was impressive with his power off the tee, causing some Blue Canyon members to turn pale when they realized how far down the fairway he was.

Richard Lee, the winner at the Thai Airways Open (Blue Canyon 2005) looks like a good outside bet after he opened with a 67. The New Zealander’s 5-under round included a 7 at the par-5 hole 6, which proved to be a difficult hole for most players. Throughout the day there were several bogeys and three putts – and some bad language – at the 6th.

The par 3s on this golf course always provide great drama, with the 14th, the feature hole, played at 196 yards to an island green. This hole is not for the faint-hearted and will provide a stern test for all players coming down the stretch. The Sunday pin position will also be cruel and will add to the excitement.

Other late scores included a steady 69 from Scotsman Colin Montgomery, and 67 (-5) from both Greame McDowell, from Northern Ireland, and Aussie Scott Gardiner.

There was also a great birdie on the 18th from Peter Hanson of Sweden to leave him with a solid round of 66, and only one off the lead after the first day.

This is the sixth time the Classic has been played in Thailand since 1990, and the conditions in Phuket will likely prove a major factor in the coming days. A combination of slick greens and thick rough will provide a good test for players, especially if the Phuket coastal wind starts blowing strong.

Play will continue tomorrow through Sunday.