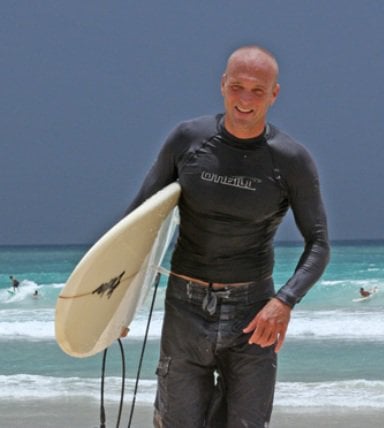 PHUKET: A distressed father is appealing to the Phuket public for help in finding his 43-year-old son who failed to make connection flights home to the US on Wednesday.

Wayne Bean expected his son to arrive back in Los Angeles on November 28.

However, after checking with the airlines it became obvious that his son, Brett Bean, had not made his 8:25am connection from Bangkok to Hong Kong. Wayne Bean does not have his son’s Phuket-Bangkok flight details for November 27, so he is not sure if Brett has even left Phuket.

“He has a year-around apartment somewhere near Patong beach; [I] don’t have any other info. He is a big surfer, hangs out around the beach with lots of other surfers,” Mr Bean wrote in an email to the Phuket Gazette.

“I have reported him missing to the US Embassy in Bangkok and Hong Kong,” he added.

Mr Bean described his son as slender, about 77 kilograms, and about 2 meters tall with “very short hair or bald”. Brett also has a large tattoo on the inside of his forearm.

The last contact Mr Bean had with his son was on November 25, when he received an email saying that Brett had had lunch with friends.