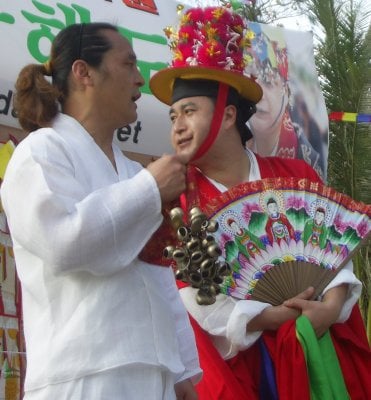 PATONG: A ceremony was held at Patong Beach yesterday to exorcize “sea ghosts” of people killed by the tsunami, in the hope that Korean tourists will be persuaded to return to Phuket.

The ceremony was organized by the the Seoul, South Korea, office of the Tourism Authority of Thailand (TAT).

The Patong Beach ceremony was conducted by Korean medium Lee Hyo Nam. It lasted about four hours and included dancing and the offering of fruit, intended to reassure Koreans of all beliefs.

Before the March 22 ceremony, Mr Lee told the Gazette that the aim of the rite was to invite the souls of all the dead, of whatever nationality, to depart to the heavens.

“The ghost that scares Koreans most is the sea ghost,” he explained. “We believe that people who drown cannot go to heaven. They remain in the sea, beneath the people swimming there. They try to lure the swimmers to the same death as they suffered, so more people will drown.

“We believe that there are about 1,000 ghosts around Patong Beach, but the aim of the ceremony is to call upon the gods of the land, sea and sky to take the spirits in the sea to the shore and from there to the heavens.”

Mr Lee added that media coverage of the tsunami had led people in South Korea to believe that Phuket was damaged far more than it was, and that things were still as bad on Phuket as they are, for example, in Banda Aceh, Indonesia.

Noonsongyi Han, Information Officer of the Seoul TAT office, told the Gazette it was felt that Koreans would be reluctant to return to the island as long as they believed it was still haunted by the ghosts of the tsunami dead.

The TAT spent 700,000 baht on the ceremony, providing flights from South Korea on Orient Thai Airlines for journalists, to ensure that the event received coverage in the South Korean media.

Ms Noonsongyi said 32 Koreans died when the tsunami struck the six Andaman provinces. Of these, 18 died on Phuket. One Korean is still missing.

“We had about 100,000 Korean tourists come to Phuket last year, and if you compare numbers for January to March last year with the same period this year, the number of Korean visitors is down about 40% this year.

“We think this is because Korean people believe in ghosts. Around 40% of Koreans are animist, 30% are Buddhist and the other 30% are Christian,” said Ms Noonsongyi.

“We hope that, after this ceremony, we will have more Koreans coming to Phuket, although I can’t predict how many will come.”

Three days earlier, 160 sportsmen took part in an overnight soccer tournament at Kalim Beach, intended to reassure people that the area was not haunted.

Altogether, 32 teams of five players competed in the event, between 6pm on March 19 and 6am on March 20.

Organizer Amnuay Kuabkum told the Gazette, “We were here all night and we didn’t see anything out of the ordinary, such as ghosts.”