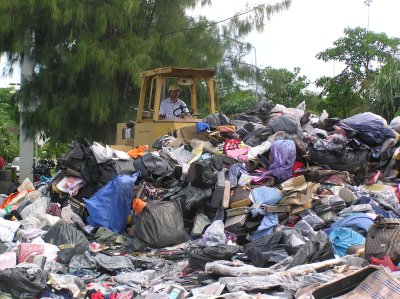 PHUKET CITY: Some 180,300 items of counterfeit goods, worth an estimated 37 million baht, went up in smoke in a mass burning at the solid waste incinerator at Saphan Hin on Tuesday.

Also at the cremation was Phuket Provincial Police Chief Maj Gen Suwit Othong, who explained that all the goods going up in flames had been confiscated in raids in Patong and Karon over the past three and a half years.

“If anyone notices counterfeit goods being hawked, they should call Phuket City Police Station at 076-219071,” Gen Suwit added.

Gen Boonrith explained that Phuket is one of five “red zones” in the country where fake goods are sold openly, and that the mass incineration was part of an ongoing “war against counterfeit goods”.