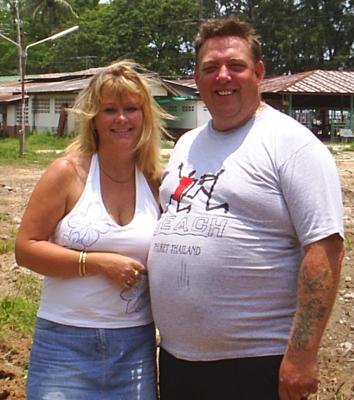 RAWAI: The would-be developers of a controversial British-style “fun fair” on seven rai of seaside land in Rawai expect to hear soon whether the project will be approved and are defending the idea in the face of criticism that it is inappropriate for Phuket.

Steve Rutter and his wife Sharon, of Manchester, England, plan to create a small fairground for children and young adults – and a clubhouse where their parents can be entertained while the kids play.

Mr and Mrs Rutter experienced considerable opposition after their plans were first unveiled in the August 14 issue of the Gazette, their critics claiming the park would be a noisy eyesore.

But, they say, their idea has been misunderstood.

Mrs Rutter said, “We have three children of our own, but after dark there’s nothing, really, for children to do. Phuket is becoming a family destination, and we’re trying to give those families something to do.”

Her husband, who worked on fairgrounds for seven years after leaving school, but is now the boss of a successful security firm in Manchester, agreed. “There’s nothing like this anywhere on the island,” he said.

The Rutters have spent a year acquiring the equipment for the park, which includes an “Octopus” ride, four “bouncy castles”, a cup-and-saucer ride, a 30-foot tall slide and a “soft play” area.

If approved, the fairground would be in the center of the site, which is now surrounded by 26 bungalows that the Rutters plan to renovate. At the beach end of the site would be the clubhouse, an enclosed venue for entertainment aimed at adults – but suitable for children – such as cabaret shows, disco parties and karaoke.

At the entrance, facing the beach, would be a food court serving Western and European food, overseen by Mrs Rutter, who ran a café near Manchester for many years.

The Rutters also intend to have “entertainment rooms” for the children, with PlayStations, videos and games for children, and airconditioned rooms where nannies will care for babies and very young children while their parents have some time to themselves.

The ride operators and maintenance staff will be expatriates, experienced in looking after such equipment, but most of the other staff will be Thai. The Rutters expect to create 30 jobs for locals.

As for the critics? Steve said, “The clubhouse is a closed building, so it will be quieter than many other venues on the island, and the fairground will be smaller than many travelling fairs in the UK. Some of the rides are of the type you would find in a municipal park in Britain.

“We’re building a three-meter-high wall round the park, so the only time you will be able to see it is if you’re standing right in front of the entrance.

“I wish people had come to talk to us first and let us explain, before criticising us.”

AirAsia to sell tickets at Tesco