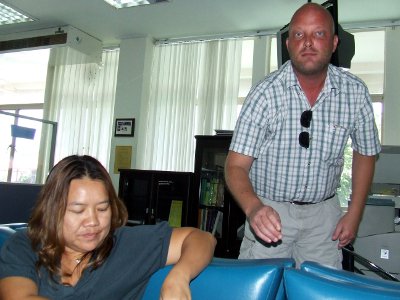 PHUKET: A Phuket estate manager terrified a team of Thai workers when he fired warning shots over their heads in an effort to get them to stop making noise yesterday morning, says the construction team’s foreman.

The couple told Duty Officer Jetsuda Saensuree that Mr Seree fired a series of gunshots over their heads as they and their team of workers were doing contract construction work on a home in The View villa estate near the Khao Khad Viewpoint in Wichit.

“Me and my eight staff were working repairing a house on the project yesterday morning. Some workers were cutting lumber needed to make the repairs. At around 9:30am, [estate manager] Seree Duangsuwan came from [his house] across the street and told us to keep quiet and stop working.

“But I told him he was not my boss and that if he had any problems he should contact the house owner.

“Instead he asked me to call the owner, but I didn’t call. Then he asked me to fight him, but I told him I came here to work, not fight,” said the Swede.

“He also told us to stop work, saying we could only work in the afternoon and could not work at all the following day,” he said.

Time is money in the construction trade, so as soon as Mr Seree departed the workers resumed their work.

“That’s when he came out of his house with a gun and fired warning shots into the sky above our heads,” he said.

Mr Suree fired two volleys of five rounds each as staff were working on the roof.

“One of our female staff panicked and fell off a ladder. She is in hospital now,” Mr Hjort said.

The woman, Ms “Gee” suffered only a light sprain.

Even as the staff were ending their day’s work, at about 4:30pm Mr Suree was walking about brandishing his firearm, said the Swede.

They appeared for questioning this morning and were happy to share their story with the media.

Mr Hjort, who has been living in Phuket for 22 years, said, “I have no idea why he acted that way. We are afraid to work on the project now as he is still walking around with a gun like a crazy man.”

Two of his workers have already said they were too afraid to return to the site, he added.

Ms Waleeporn said the team tried to minimize disturbance to neighbors by doing the noisy work in the afternoon.

“But yesterday we were nearly finished, so we wanted to get the job done,” she said.

As an act of intimidation, the shooting was effective.

“After he fired, we called for the home owner’s assistance and decided to do some other work that did not make noise for the rest of the morning,” she said.

“Actually, we have another repair job scheduled in another house nearby, but we chose to cancel it,” she added.

Police accepted the complaint and said they would call in Mr Suree for questioning, she said.