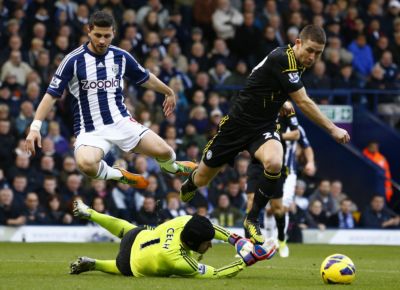 PHUKET: Manchester United were humbled 1-0 by Norwich City and Chelsea upset at West Bromwich Albion on Saturday as Premier League champions Manchester City took advantage of their rivals’ mistakes with a 5-0 demolition of Aston Villa.

United, who suffered their third league defeat of the season in the late kickoff at Carrow Road, succumbed to a 60th-minute header from their former youth team player Anthony Pilkington.

City’s victory at the Etihad Stadium, engineered with two goals apiece by Argentine dup Sergio Aguero and Carlos Tevez, took them top of the league for the first time this season.

Roberto Mancini’s side have 28 points from 12 matches, with United second on 27 points.

Chelsea have 24 points from 12 games with Albion a point further back.

Southampton increased the pressure on Queens Park Rangers manager Mark Hughes by winning their basement battle 3-1 away and Reading, who also started the day in the bottom three, surprised Everton with a 2-1 home win – Adam Le Fondre’s double leading them to their first league win this season.

Arsenal had kick-started their season in the early Saturday kickoff by beating north London rivals Tottenham Hotspur 5-2 after Spurs striker Emmanuel Adebayor was sent off for a reckless first-half challenge on Santi Cazorla.