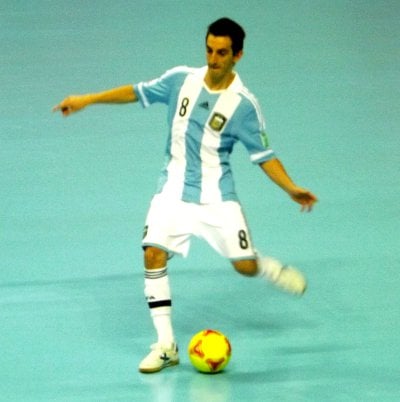 PHUKET: Footy fans across the globe look forward to four strong quarterfinal match-ups of the FIFA Futsal World Cup, which kick off tonight in Thailand as follows:

Many fans have been quick to place all their bets on defending champions Brazil to sail through to the final round, especially after witnessing their 16-0 stomping of Panama in the second round on Monday.

However, Brazil’s next challengers Argentina will not be conceding the semifinal ticket so easily.

La Albiceleste – white and sky blue – are just the type of team who can step up when it counts, proving this on Sunday when they conquered and thus eliminated a seemingly stronger Serbian side.

Colombia will be aware of their opponent’s weakness: Ukraine have shown a number of times in this tournament, that they can dominate the first half, but tend to weaken in the second half.

Namely, in the group stage when the European powerhouse charged ahead 5-0 against hosts Thailand before going on to concede three goals in the second half, and likewise against Japan in the round of 16 on Sunday when they won 6-3, but only after having a 6-0 lead at half time.

It is anyone’s guess who will be victorious in the clash between Italy (no 3) and Portugal (no 5), with both sides leaving little room for doubt in their ‘futsal worthiness’ earlier this week, when they convincingly eliminated Egypt and Paraguay, respectively.

Likewise, in the match of the night, when the world’s top side Spain take on the fourth best ranked side, Russia, the outcome will be just as difficult to predict.

Although elated after eliminating hosts Thailand on Sunday by a 7-1 scoreline, Spain face a much more difficult and challenging opponent tonight.

Russia, with five of its key players having been raised and trained in Brazil, have yet to concede a goal in the tournament so far. However, having only beaten the Czech Republic 3-0 on Monday, some doubt that the Russians will be able to harness their goal scoring flair against a team like Spain.

The match will be a repeat of the latest European championship, in which Spain won in extra time.

In any case, all will be revealed tonight.