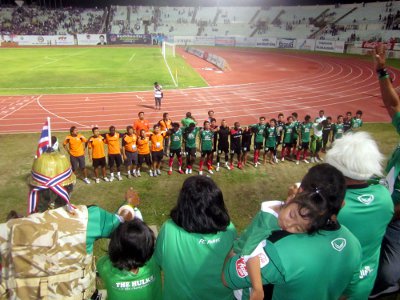 PHUKET: FC PHUKET got their second road win of the season last night, with a well-deserved 1-0 win against Songkhla FC in a hard-fought match at Tinsulanond Stadium in Songkhla Town.

The lively match was played under clear skies, following light showers earlier in the day. Some 23,000 fans turned out making it the largest crowd Phuket has played in front of all year.

Despite the narrow score margin, the 300 ‘Hulk’ fans, who left by bus at 4am for the match, will passionately attest that the score difference should have been tripled.

Highly questionable officiating denied the Southern Sea Kirin two goals in the first half. Going into half time, allegations of corruption could be heard echoing throughout the visitors’ stands.

Luckily for Phuket, Songkhla had to play the match without two keys attackers. Both Panai Kongkaphan and Brazilian import Chayene Santos were unavailable due to bookings in the previous week.

As a result, Phuket, playing in trademark green with red stockings, dominated play throughout much of the game.

The Southern Sea Kirin’s perseverance paid off in the 70th minute after a free kick by Sarach Yooyen was headed into the back of the net by Jongrak Pakdee, silencing the home crowd for the third and final time yesterday evening.

Jongrak got “man of the match” honors for the goal, which can be viewed here. [Scroll past Thai text, click on media player].

Though no official clock was displayed, one fan’s unofficial timekeeping indicated Songkhla was given a full 10 minutes of extra time before the final whistle was blown, giving the home team at least half a dozen fruitless attempts to equalize.

Though armed guards were posted throughout the stadium, it was clear that they were mainly for the safety of officials. The vast majority of both Phuket and Songkhla supporters have become united against what some perceive as questionable officiating.

As for fan relations, the hospitality and sportsmanship shown by the Songkhla fan base was nothing short of superb. Before the match, the “Fighting Bulls” fan club hosted “The Hulks” fan club in an indoor futsal match in which the hosts prevailed 6 to 4.

Following that friendly match, Songkhla fans treated the weary Hulks to khao yum (herbal rice), a local delicacy, in return for the hospitality given to Songkhla fans on June 25, when the Hulks treated them to khanom jeen (rice vermicelli with curry).

Now on 35 points with ten matches remaining, Phuket and are still in 8th place, but just three points shy of Songkhla, PTT Rayong, Bangkok United and Rajpracha, each with 38 points.

That will set the stage for a big home match next Sunday, when Phuket will host PTT Rayong at Surakul Stadium.

After which they’ll be on a make-or-break road trip throughout October.

Other TPL Division One results this weekend: