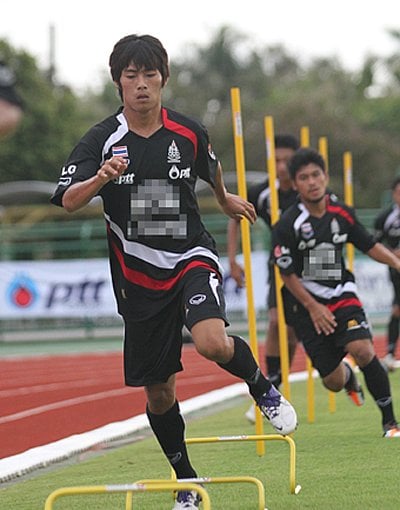 PHUKET: Tonight’s charity match between FC Phuket’s ‘A’ team and Thailand’s U23 national team at Surakul Stadium has been moved forward to 5pm, and not 6pm as previously announced by the organizers.

Tickets will be priced at 100 baht for adults, with free entry for young children. A portion of the proceeds will be donated for flood relief efforts in Bangkok and central Thailand.

This evening’s encounter is the U23’s final preparation match in the south leading up to the Thailand SEA Games before the team flys back to Bangkok on Friday morning.

The U23 squad opened their southern training tour in Songkhla Town last week when they lost to the Songkhla FC Southern Fighting Bulls by two goals to nil.

Arriving in Phuket on October 28, the national team checked into the Phuket Orchid Resort & Spa in Karon where team manager Kasem Jaliyawatwong, had them doing six kilometer runs on the beach every morning.

The team was initially set to train in Chiang Mai. However Kasem explained that he decided on Phuket since the weather is similar to Indonesia.

The team found their form and redeemed their initial loss when they annihilated the FC Phuket “All Stars” ‘B’ team by a score of 6-1 last Sunday at Surakul Stadium.

FC Phuket’s star goalkeeper, Jonathan Matijas, talked with the Phuket Gazette this afternoon and confirmed that he will be playing against Thailand tonight.

“I don’t think we will all be ready because we just started training a few days ago,” he said. “Thailand on the other hand have been training continuously for some time. They are fit and are a good team so will be hard to beat,” he added. “However, we don’t like losing either so I can tell you that will be trying our best,” he assured.

“However, Kone Adama and Coulibaly Abdoul will not play because they are still in the Ivory Coast,” he said.

Johnathan also thinks there’s a good chance fans will get to see the form of Carlo Coppari from Italy, who is on a prospective try-out visit with FC Phuket.

“If the coach likes him and he plays good with the team, he may be signed on to FC Phuket for next season,” he added.

Coppari has played in the Italian Serie B League with teams including AC Mantova, Mezzocorona and Poggibons.

The U23s are due to fly from Bangkok to Jakarta on Sunday morning and then scheduled to play the 2009 SEA Games football champions, Malaysia, in their opening match on November 9.

Also in group A with Thailand and Malaysia are hosts Indonesia, along with Cambodia and Singapore.

In group B are Vietnam, Laos, Brunei, Timor, Myanmar and the Phillippines.

Looking to win their 12th SEA Games football championship, Thailand failed to make the final in the past two years after being edged out by Malaysia.

If successful this year, the squad can look forward to being awarded a 10 million baht bonus on their return.