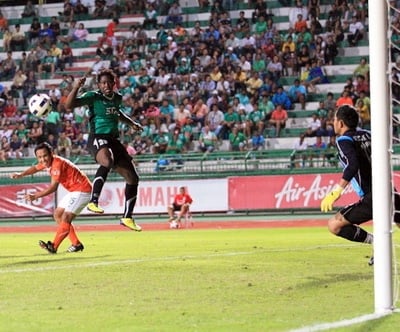 PHUKET: A goal by Sarach Yooyen just three minutes into play was all FC Phuket needed to secure a 1-0 victory over Thai League Division 1 rivals Bangkok United in an exciting match at Surakul Stadium last night.

In front of 8,520 fans, crowd favorite Sarach Yooyen used his lightning quickness to get past two defenders before launching a shot from inside the penalty area.

The shot appeared to get a favorable deflection off the foot of the Bangkok United defender and into the back of the net. Sarach was given credit for the goal and also took “man of the match” honors as the only scorer.

FC Phuket coach Sompong Wattana expressed satisfaction with the win, saying his ‘boys’ played well and were determine to collect as many points and possible and climb further up the table. The win moved the Southern Sea Kirin up to eighth place in the table, with six more Division 1 matches scheduled to take place today.

In other Division 1 matches yesterday:

First-place Buriram FC beat Bangkok FC 4-1. Playing in front of a home crowd of just over 1,000, Bangkok FC’s chances of pulling off an upset evaporated suddenly in the 23rd minute, when Bangkok FC player Thanapon Udmalap was sent off with a red card.