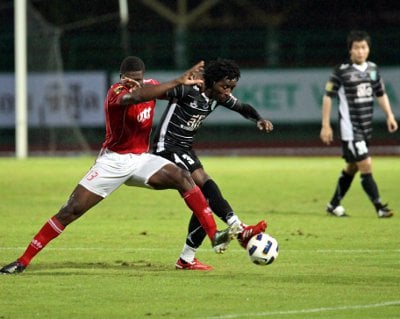 Phuket went into the match without golden boy Sarach Yooyen, but Watcharapong “Paeh” Jan-ngam shouldered the goalscoring responsibilities dutifully. He got the Southern Sea Kirin on the board in the 7th minute when he powered down the right wing, past a PTT defender and hammered the ball inside the far post.

Once in the lead, Phuket controlled play throughout much of the first half.

PTT went on the attack in the second half, but despite hitting the crossbar they could not find the net. Phuket also saw two chances career off the crossbar before Watcharapong doubled their lead in the 72nd minute with a towering header off a free kick from Boubacar Issoufou.

Minutes later, Phuket attacked PTT’s right flank with Kone Adama making it all the way to the goal line, drawing defenders with him. His shot towards Watcharpong at the near post was parried by PTT’s goalkeeper out to the middle of the penalty area where Nussim had followed in support, and the substitute calmly finished for a 3-0 final scoreline.

To watch the goals click here. [Scroll past the Thai text to the media player]

Phuket’s win avenged a 1-0 loss away to PTT Rayong earlier in the year and moved the Southern Sea Kirin up to a share of sixth place with PTT Rayong and Bangkok FC. Bangkok also upset the form book with a home win against third-place Chainat. The top three teams are automatically promoted to the Thai Premier League next season.

A large contingent of PTT supporters made the trip from Rayong and the Gazette noted that the boisterous fans were a class act, even in defeat congratulating their players as well as the Phuket team and home support.

Phuket’s next match will be at Chiang Mai on Saturday. Few FC Phuket fans are expected to make the long-haul journey to the northern city as the match falls in the middle of the Phuket Vegetarian Festival.

A source in the “Hulk” FC Phuket fanclub said only a handful of Phuket students studying in Chiang Mai would be there to see them vie for their fifth straight league win against 18th-place Chiang Mai, who already have six home losses.

“Since we would have to pay for the trip ourselves, it would take too much time to go by bus. We have to work too, and a plane would cost too much for everyone,” said the source.

Those who do want to make the journey, but can’t afford to fly, are reminded that there is now direct bus service linking Phuket and Chiang Mai aboard the “VIP” fleet of the Green Bus service. The journey costs 1,770 baht, takes 22 hours and leaves Phuket at 3pm daily.

For a full report, pick up the next issue of the Phuket Gazette.