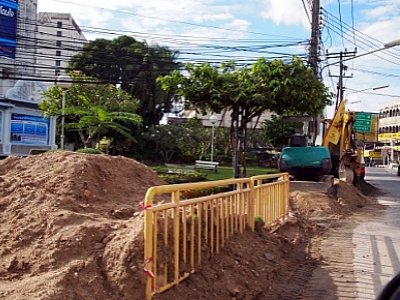 PHUKET: Work installing underground utility cables in Old Phuket Town has been suspended for the duration of nine-day Vegetarian Festival, which starts with the arrival of the new moon tomorrow.

“There will be many processions along the streets of the Old Town. The traffic jams would be a nightmare if they continued working while the annual festival was going on,” said Phuket City Mayor Somjai Suwansupana.

Work will resume immediately after the festival, she said.

The work is the second of a three-phase effort to beautify the old quarter and increase its attractiveness to tourists.

Work along the selected parts of the more heavily trafficked Thepkrasattri Road and Phuket Road would be a little more complicated.

“The high-voltage cables there are more difficult to work with than regular cables, but we are trying to work as fast as we can in order to minimize the effect on traffic and local businesses in the area,” explained Mayor Somjai.

Work along on Dibuk Road, scheduled to recommence on October 23, targeted for completion by the end of December.

“We started excavation work in June. The work on Dibuk Road will be very much like what we did along Thalang Road,” Ms Somjai said.

The project has suffered other delays, pushing the scheduled completion date for the entire project from this coming December back to March 2012, she said.

“We had some problems with residents in the area. Some of them didn’t understand the project, so I asked the relevant agencies to explain to them in detail what is going on.

“We also had some problems sourcing the cables, as some of the equipment needed to be imported. But all of the problems have been solved,” Mayor Somjai said.

“As soon as we have completed the entire project, we will cut off the power in all the overhead cables and switch it on in the underground cables. Then we will remove all the poles and repave the road, making the whole area ‘wireless’,” she added.