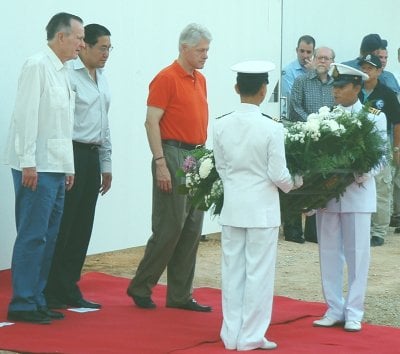 THALANG: Projects to rebuild tsunami-ravaged areas should be “locally-driven” former US presidents Bill Clinton and George Bush Snr declared after touring parts of Phuket and Phang Nga at the weekend.

Thailand was the first stop in a four-country tour by the ex-presidents, aimed at encouraging private and corporate donors – particularly in the United States – to continue giving to the relief effort.

After visiting Baan Nam Khem, Phang Nga, which was devastated by the tsunami, and seeing a small project to repair and rebuild fishing boats, on Saturday, ex-President Clinton told a press conference at Blue Canyon Country Club he had been impressed by the Thai government’s progress in rehabilitating the region.

The performance, he said, had “far outstripped the predictions” of what could be done, and this was an illustration of why international donors should keep their distance in the rebuilding.

“They might help to increase the capacity in some areas, but it has got to be locally driven, with the rest of us just showing up to help,” he said. “It is the lives of the people here, their future, their economy, their children.”

Former President Bush agreed, saying: “The international officers have to respect what the locals need. We should respect the local expertise and knowledge of the countries which are receiving assistance.”

President Clinton, who had described Thailand as “our oldest ally in Asia”, said one in three American households had donated to the tsunami appeal.

Thai Prime Minister Thaksin Shinawatra, who joined Mr Bush and Mr Clinton for dinner at Blue Canyon, told the press conference that Thailand was “very grateful” for the US’s support after the tsunami.

En route to Blue Canyon, the former presidents stopped at Mai Khao cemetery and mortuary where, after walking along the international wall of remembrance, they laid a wreath before the section devoted to American victims.

After the press conference at Blue Canyon, Thai Government Chief Spokesman Jakrapob Penkair said both former leaders had said they were impressed by the way Thai people had helped victims, regardless of race or creed.

“It gave a good image of us when compared to other countries, even American society,” said K. Jakrapob.

He said, “People criticized us at first because we didn’t accept foreign money, but we had made it clear that what we really wanted was high-technology help … rather than money.

“And we have accepted forensic science help from Australia, advice about the early warning system from the United States and other specialist help from European countries.”

The Bush-Clinton visit should help resuscitate tourism in the region, said K. Jakrapob.

“People around the world see two leaders from different political sides working together to help people in Thailand and other tsunami-affected countries,” he said.

“That can say more about Thailand being safe and nice [than any marketing campaign],” he added.

Two-month-old Danielle Von Sengbusch found herself the center of attention, even though she was too young to realize it.

Danielle’s mother, Selina Newton, who works at Blue Canyon, was at the front of the crowd gathered to watch the two ex-presidents, accormpanied by PM Thaksin and Phuket Governor Udomsak Usawarangkura, go for dinner.

“Hey, George, look at the baby,” ex-president Clinton called to his fellow ex-president. Mr Bush, who had talked earlier about how moved he had been by the children he had met in Phang Nga, took Danielle gently in his arms and cradled her for a couple of minutes.

Ms Newton told the Gazette later, “I felt very proud, of course, seeing that; it was a good moment.”