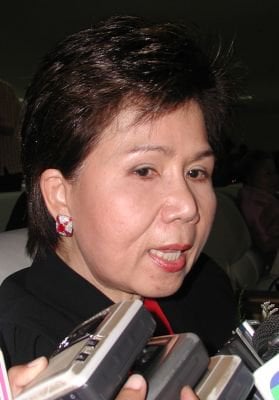 PHUKET CITY: Juthamas Siriwan, the Governor of the Tourism Authority of Thailand (TAT), today lamented the long delay in coming to a decision on the site for Phuket’s International Convention and Exhibition Center (ICEC), saying that the arguments have cost Phuket 100 billion baht in lost revenue.

“Building an ICEC in Phuket has to be delayed until we have a clear picture of exactly what people want, and where they want it,” K. Juthamas said. “But the slow process has cost an unseen 100 billion baht, which is not a small amount to lose, because this idea was suggested about 10 years ago.

“Whether an ICEC is built [in Phuket] or not depends on the judgment of Phuket people. I don’t want to keep repeating that Phuket has wasted many opportunities to decide where to build an ICEC, but I do want people to think of what Phuket deserves but which is being lost,” she added.

“We haven’t done anything about the ICEC in Phuket. It still has not passed the decision-making process [of what is to be built and where], while in Chiang Mai they already have completed construction and design plans and will soon begin.”

K. Juthamas pointed out that that the revenue generated by an ICEC could go towards developing Phuket and protecting the island’s environment, and suggested that an ICEC would attract more “quality tourists”.

“There are 4 million tourists [a year] in Phuket, but if 2 million of them were tourists who came for meetings and to use an ICEC, it would mean we would have more ‘quality tourists’ and [Phuket’s environment] would probably suffer less damage.”

She added that, in addition to attracting more quality tourists, Phuket would also improve its image around the world as a place to stage product exhibitions, international conferences and other large-scale functions.