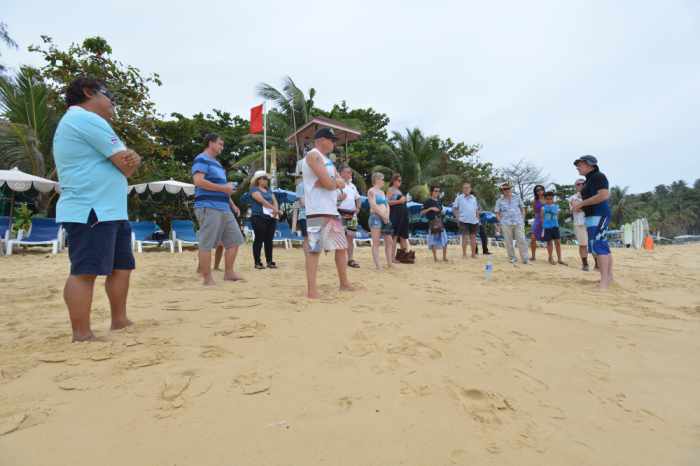 PHUKET: It’s that time of year, when the dark moisture-laden clouds tumble into this island paradise and the sea turns into frothing, churning mayhem. But that doesn’t stop people from jumping in for a little dip and next thing they know the beach has dropped out from beneath their feet and constant pounding waves start to wear them out.

Such is the experience hundreds of beach-goers have on Phuket beaches every year. Fortunately, the majority find their way back to safety or are plucked from the pull by one the island’s trusty lifeguards. Dozens every year are not so lucky.

However, there are a group of people who are trying to make Phuket’s beaches safer. One such person is Phuket Lifeguard Club patron and supporter Jayne MacDougall.

Dr Brander, aka “Dr Rip”, spoke on Karon Beach to a group of about 12 people, including three Phuket Lifeguard Club members. He gave a 20-minute lecture about how to identify rip currents and escape them, and gave other beach and water safety tips. The main attraction, however, came afterward when he released a bright purple dye into the surf as a visual demonstration of a rip current.

“I studied beaches in Canada and did my master’s there. I took a year off and went to Australia, went to Bondi Beach, and my friend pointed out this rip current and I couldn’t see it. I thought, hang on, how can you study something if you can’t see it, and that triggered my interest,” explained Dr Brander.

“I’ve come to Thailand many times on holidays and I’ve heard about a lot of these rip drownings in Phuket and my research is all about learning more about what we can do to prevent rip drownings by understanding people’s awareness levels,” says Dr Brander.

Another goal of Dr Brander’s visit in Phuket is to collaborate with the Phuket Lifeguard Club to secure funding to launch more safety initiatives in Phuket.

“I’ve spent a lot of time looking at the beaches [in Phuket], mapping the beaches and learning more about them… We hope to get some funding next year to come back and do a survey of locals, Thai and international tourists to find out where their knowledge of rip currents is and then use that to develop some safety information.”

Dr Brander grabbed a bucket with what looked like a kilo of coffee grounds and began wading into the sea. In chest deep water he stirred some water into the bucket and released the contents, which immediately turned bright purple.

“I put the dye in fairly close to shore and right away they can see just how fast it moves off-shore and they can see how far it goes and they can appreciate that ‘if that was me, that’s what would happen to me’,” says Dr Brander of the dramatic demonstration.

Within seconds, the small harmless cloud of purple turned into a long plume which stretched out beyond the pounding surf.

“A lot of people drown in rip currents, not only in Phuket but around the world. Any beach that has a lot of breaking waves can have rip currents. But so many people just do not know what rips are – they think they get pulled under by rips, they think they are called rip tides. You can explain all of these things, but the best thing to do is a visual demonstration.”

The demonstration left no question as to which direction the currents were flowing and how quickly.

“What triggered my interest in going from science to beach safety is I saw so many people drown in rips where it shouldn’t have ever happened. I realized that people didn’t have the basic knowledge that I had and so I thought that it is not hard to teach people and the dye is just such an effective method,” said Dr Brander, explaining how he came to be called “Dr Rip”.

Phuket Lifeguard Club President Prathaiyut Chuayuan was present with two other club members to witness the demonstration. He expressed concern and frustration with the number of people in the water regardless of red flags, danger signs and repeated warnings from lifeguards.

With continuing education and more resources to give foreign tourists the knowledge to stay safe, Dr Brander and Mr Prathaiyut both believe that many deaths on Phuket beaches can be averted.

As the purple dye stretched thin beyond the red-flag-dotted beach, three swimmers entered the water directly behind a prominent “No swimming sign”. In waist-deep water, one girl was obviously being pulled by the strong current but was able to get her footing and retreat into shallow water.

“That’s why I do it, because rip drownings are avoidable – if you don’t get in one, you won’t drown in one.”