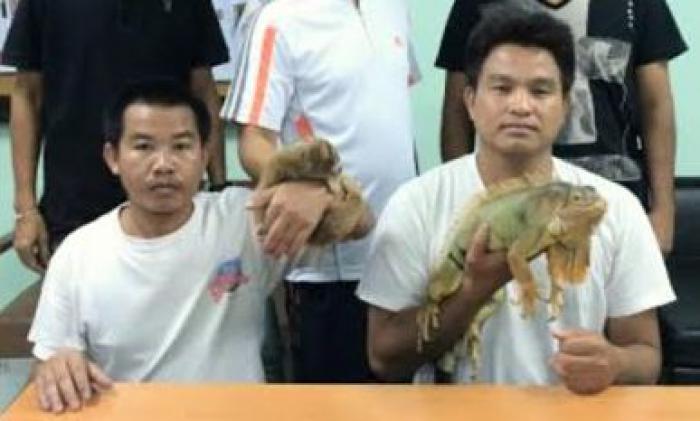 PHUKET: An off-duty police officer leaped from his bicycle and arrested two out of six men on Soi Bangla who were offering tourists photo opportunities with animals yesterday.

Lt Col Sutthichai Thianpho swooped in to make the arrest of the six men after seeing them touting four iguanas and two slow lorises. He quickly arrested Suchai Jaroenpu, 32, from Phang Nga, and Boonso Kenthao, 34, from Kathu. However, the other four touts managed to escape.

Mr Suchai was carrying a loris, and Mr Boonso an iguana.

The slow loris is a protected species, and requires a permit to own.

“There will be no touts offering photos with animals on Bangla Road. We will keep arresting them until they are all gone,” said Col Sutthichai.

Exactly a week ago, police arrested another pair of men for touting iguanas on Soi Bangla (story here).

Although owning an iguana as a pet is not illegal, Patong Police are cracking down on animal touting on Bangla Road.

Both men were charged with inflicting harm to an animal and causing a public nuisance, said Col Sutthichai.

Mr Suchai could not produce the required permit for owning a slow loris and was charged with possession of a protected species without a permit.

The iguana was sent to the Environmental Conservation Division at Khao Phra Thaeo Wildlife Sanctuary and the slow loris was sent to a wildlife nursery station in Phang Nga.