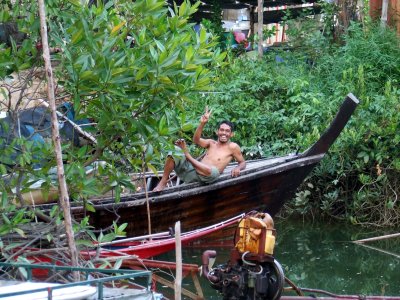 Addressed to Gov Wichai Phraisa-ngob, the letter was received by Vice Governor Teerayut Eimtrakul who commented that a committee would be arranged to consider issues raised in the document before passing on any suggested amendments to the Department of Public Works and Town & Country Planning (DPT).

The various groups were led by veteran environmental activist Tanu Nabnian. Targets of their suggested amendments are the Phuket General Plan of 2005 as well as a new draft plan not yet approved.

“The DPT in conjunction with their Phuket office are amending the Phuket General Development Plan of 2005 and drafting ministerial regulations for a new plan, details of which are currently under consideration by the Office of Royal Decrees.

“Local groups affected by the plans, under the aegis of the Phuket Coastal Community Organization Network, are exercising our right to petition for amendment, under the relevant laws and the 2007 Constitution of the Kingdom of Thailand, sections 66 and 67, and the National Health Act of 2007, section 11,” said Mr Tanu.

“To develop the suggested amendments the group worked with relevant government agencies, technical institutions, private groups, private development organizations and individual members of our network. The proposed amendments are aimed at fostering balanced, sustainable development and bringing about the utmost benefit to society and the general public,” he added.

Amendment of the 2005 Plan and of the draft plan will also solve problems related to environmental quality, protecting and conserving natural resources, and protecting valuable, beautiful traditions and local culture, Mr Tanu said.

Impetus for the suggested amendments came from review of the draft plan, in which all areas of Phuket with some density of inhabitants were zoned in colors indicating they were all open for continued residential development, he explained.

“But the character of communities differs in the various areas. Cities, especially, differ from communities outside city limits, and that results in planning at odds with the facts,” he said.

Citing as evidence of such, Mr Tanu mentioned “areas slated for single family residences located inside forest conservation areas and exceptions that allowed for apartment blocks in delimited coastal areas.”

“No sorting out has been done of where development might be appropriate, with the result that it will occur in conservation areas around the island. That conflicts with restrictions aimed at preserving forests, water-courses, aquifers and the environment,” he said.

Another area of concern involved places designated for tourism, recreation and marina development.

“Plans should discriminate between areas appropriate or inappropriate for such developments and clearly specify the kinds of developments allowed. Uncontrolled tourism in every locale makes preservation of the environment and fisheries difficult,” he said.

Groups supporting the petition “are all grassroots community groups involved in conservation of coastal resources, protecting forest and other public lands from encroachment, problem-solving and reducing social tensions at the local level, and grassroots economic development,” Mr Tanu said.