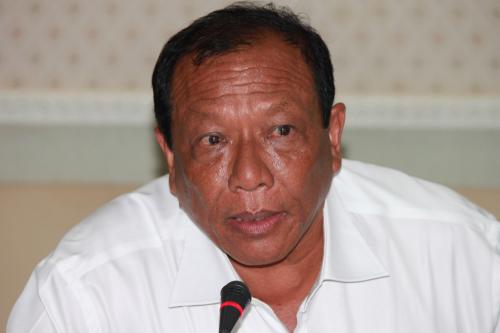 PHUKET: Patong Mayor Pian Keesin was suspended from office by the Administrative Court Region 8 in Phuket Town yesterday over a vote fraud complaint filed against him by the Election Commission in Bangkok.

“We received the court order yesterday instructing Mayor Pian to cease all activities in his capacity as Mayor of Patong,” confirmed an official at Mayor Pian’s office.

“He is now waiting to receive a subpoena notifying him of when to present himself to the court and testify in the hearing concerning the complaint against him,” she added.

Mayor Pian will remain suspended from office until the court hands down its verdict, the official explained.

“In the meantime, Deputy Mayor Chairat Sukban will fulfill duties as Acting Mayor,” she said.

Mayor Pian and the five councilors stand accused of importing voters specifically to cast votes in the election.

A complaint against the “Patong Six” was filed with the Phuket Election Commission (PEC) after discrepancies were noticed between the number of votes cast in Patong Voting District 1 and the number of voters registered in the area.

The only councilor to win – and so far, and keep – a seat in Patong Voting District 1 from last year’s election is Chalermsak Maneesri of the Patong Gao Na (Patong Progress) party.

Mr Chalermsak was ordered out of office in 2003 after he was found guilty of importing voters specifically to cast votes in the election (story here).

Just one year earlier, Mr Chalermsak’s brother, Surasak, was ordered out of office by the then-Interior Minister Purachai Piemsomboon, who accused Mr Surasak of bringing the office of mayor into disrepute (story here).

The complaint against Mayor Pian and the five councilors was filed by Tachapon Khamintong, an officer at the Kathu District Office.

The complaint also follows Mayor Pian being publicly named by Department of Special Investigation (DSI) Director-general Tarit Pengdith as being under investigation on suspicion of involvement in the Phuket “taxi mafia” (story here).

If the court does rule against Mayor Pian, he will be allowed to run for re-election, confirmed PEC Director Kittipong Thiengkunakrit (story here).